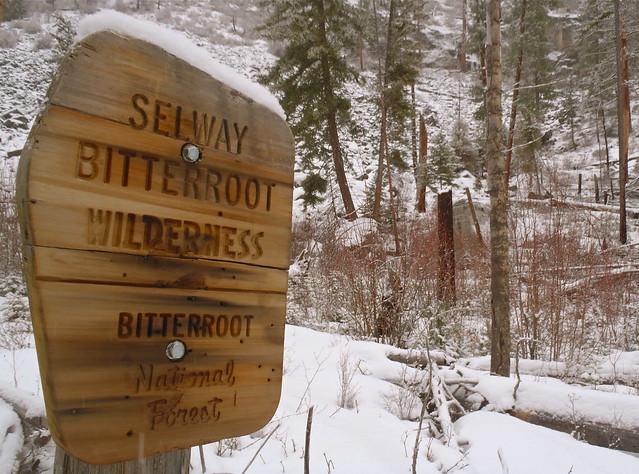 Another weekend, another canyon. I had ambitious plans to hike five miles up Mill Canyon on the Mill Creek Trail, then connect with the trail leading to Hauf Lake, which is described in a guidebook as being “a brutally steep trail 2.0 mile long trail that is better suited for mountain goats than people”, and camp at the lake. I didn’t end up making it Hauf Lake, but my consolation prize was spending my first night in the 1.3 million acre Selway-Bitterroot Wilderness. 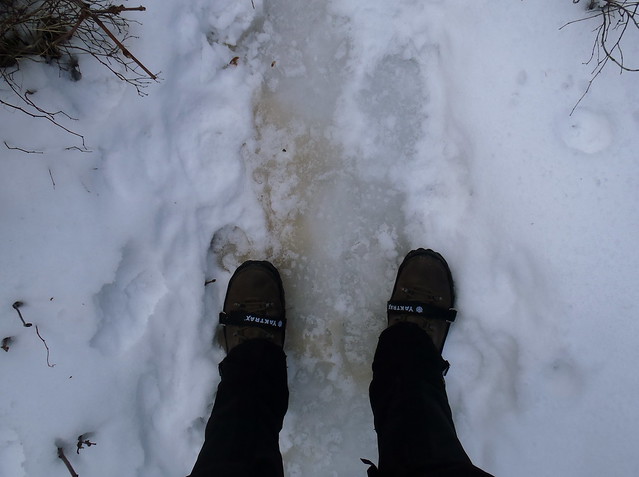 I arrived at the trailhead mid-morning on a partly sunny day and immediately received some crucial information from a gentleman and his dog who were exiting the trail. According to him (the dog didn’t have much to say), the trail was a solid sheet of ice. I took his word for it and returned home to grab the Yaktrax for my boots that I had forgotten. I’d packed them for my last trip and didn’t need them and it simply slipped my mind to re-pack them for this trip. That mistake cost me almost an hour in travel time, but it was much better than slipping on the ice and breaking a bone or two. 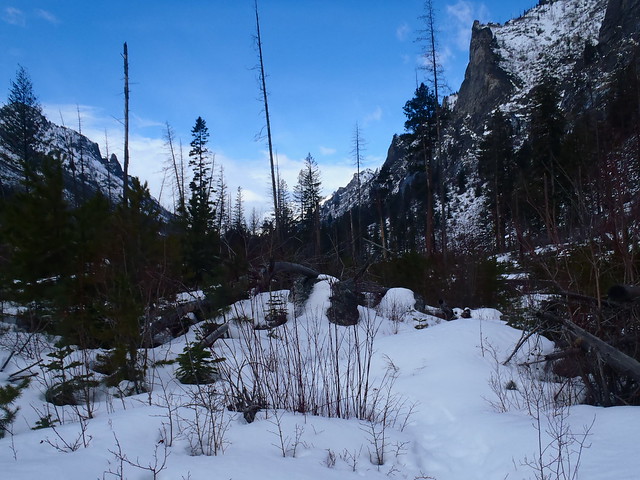 The trail conditions were just as bad as the hiker had indicated, but between the Yaktrax and trekking poles I was able to maintain a reasonable pace with some degree of safety. The first few miles of trail flew by as clouds drifted overhead and snow crunched underfoot. Sheer cliffs soaked up the sunlight. I took a short break at a frozen Mill Creek Falls, ate some snacks, checked my map and the guidebook description, and then continued up the canyon. 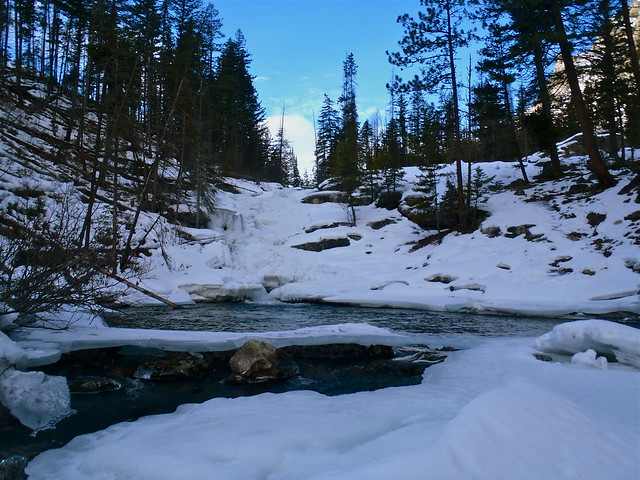 Despite the fact that trail remained relatively level, the difficulty of the hike increased considerably after the falls. Almost as soon as the snow had deepened enough to require snowshoes I encountered the first of a dozen or more blowdowns that would slow my progress and test my patience and fitness.

Trails littered with blowdowns aren’t anything new to me, but attempting to go over, under, around, and through them — “prepositioning” as a friend and I termed it on a hike particularly memorable for the frequency of blowdowns — in a few feet of snow, with snowshoes on, and with a fully-loaded backpack for a night out in the winter was a new experience; I found it to be exceedingly difficult but not altogether unenjoyable when compared to other unpleasant situations and circumstances of existences. It’s all relative, I suppose. I’d take prepositioning blowdowns in the mountains over changing a flat tire by the side of an interstate in subzero weather, for example, and would almost certainly choose it over watching sports from the couch. Both beauty and suffering are all in the eye of the beholder, I guess. 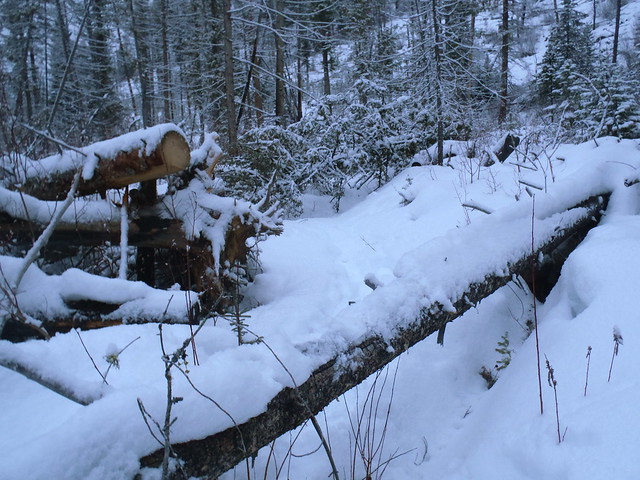 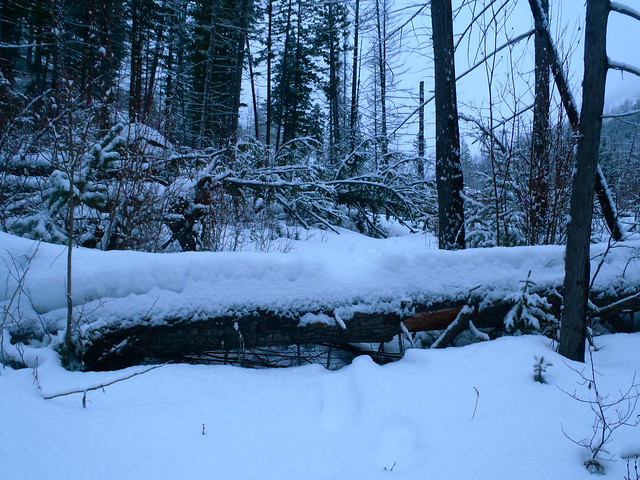 The snowshoes inevitably became entangled at every opportunity, especially at the most inopportune opportunities, and the weight of the pack made rising from every crouch, bend, and scoot exponentially more arduous. In some sections of the trail it took me ten minutes to go three hundred feet. A source told me there were 26 downed trees in the mile after the falls. Sometime during all this, I guess while trying to put my mind on other things, I realized that I had forgotten the spinach and mushrooms for my pasta, but fortunately had remembered the tuna. Last trip I’d forgotten the tuna but remembered the spinach and mushrooms. Needless to say, I recognized after an hour or so that I would not be making it to Hauf Lake and would instead make camp at the first suitable location — which, oddly enough, was shortly past the unsigned junction with the trail to Hauf Lake. I quickly tended to the necessary camp chores — tent, water, change into dry baselayers — and laid on my closed-cell foam sleeping pad on top of the snow and rested my eyes for a few moments. 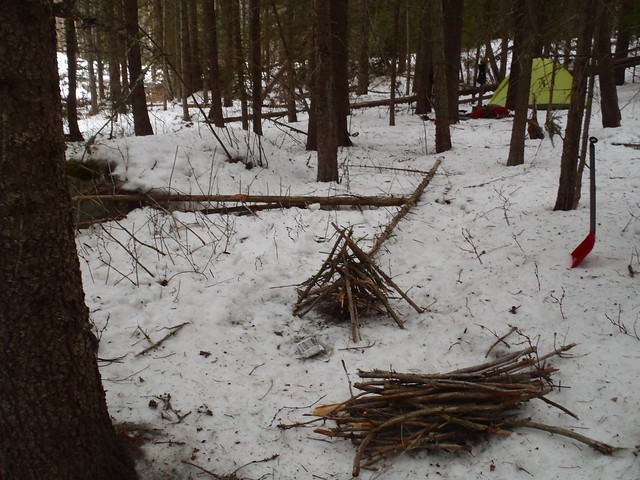 The campsite was scenic in a cozy, dense-forest, mountain stream nearby sort of way but lacked the jaw-dropping charm of the campsite in Blodgett Canyon. While I seldom have fires on my backpacking trips, something about the campsite compelled me to indulge my inner Prometheus. I gathered up the readily available downed wood — I guess was an upside to all the downed trees — and set up about getting the campfire ready to light once I had finished dinner and desired something to fill the time between dinner and sleep. On winter trips, that time is usually pretty short for me. 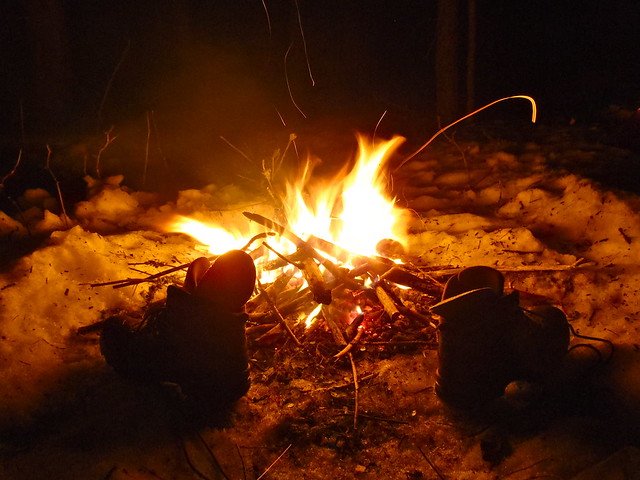 After dinner, I tried to listen to “All Things Considered” on NPR, but the reception was punctuated by an amount of static that rendered it barely listenable. I sat through a portion of the program before I got creative and tried to fashion an “antenna” out of a trekking pole and the aluminum foil-like windscreen to my stove. It didn’t work, but killed about ten minutes of time, and ultimately I found myself listening to Wilco’s classic 2001 album “Yankee Hotel Foxtrot” while watching the flames burn the wood into coals while illuminating the snow.

Once the fire had burned down I headed into the tent to continue reading “Billy Budd, Sailor” by Herman Melville. I tend to prefer reading short stories on my backpacking trips, particularly those of classic literary figures of the 19th and early 20th centuries — Jack London, Herman Melville, Edgar Allan Poe — but could never quite put my finger on exactly what was so appealing about reading such works. Something clicked for me on this trip and I think I have a slightly better understanding about what it is that I found so compelling about reading such pieces of literature in the wood. The setting of the books is not modern, and the setting I’m in when I’m reading them is not modern, and for some reason I feel like this allows me to focus more on the narrative, the characters, and the story itself. The stories don’t reference all the trappings and incidentals of modern life, and the trappings and incidentals of modern life aren’t around to distract me; it seems a perfect fit.

Anyways, after a dozen or pages I closed the book, then my eyes, and drifted off to sleep. I woke a few times during the night to the sound of trees falling or perhaps small avalanches (I’m too new to the landscape to be able to differentiate between the two) and the accumulations of wet snow sliding down the sides of the tent. Other than those minor interruptions, I enjoyed a warm and cozy night of rest. It was noticeably warmer than the previous weekend, as the bottle of water in the tent didn’t even show the first signs of freezing.

I crawled out of the sleeping bag an hour or so before sunrise, made two cups of coffee, and begin packing. I struggled with the notion of whether it was better to have the most difficult part of the hike first thing in the morning or if I would have preferred to encounter the obstacles after I’d hiked for a while. Having no choice in the matter, I stretched and began the five-mile return hike to the trailhead in a steady, wet snow that melted almost as soon as it hit my jacket.

The obstacle course section of the hike seemed to end mercifully quickly and allowed me to shift my focus to appreciating the landscape rather than trying to overcome it. The dead trees (victims of a fire more than a decade ago), snow and dense fog gave the hike a gloomy, eerie charm — but it was a charm nonetheless. The huge cliffs that had been so captivating on the hike in were, in whole or in part, obscured by the fog and dusted in fresh snow. 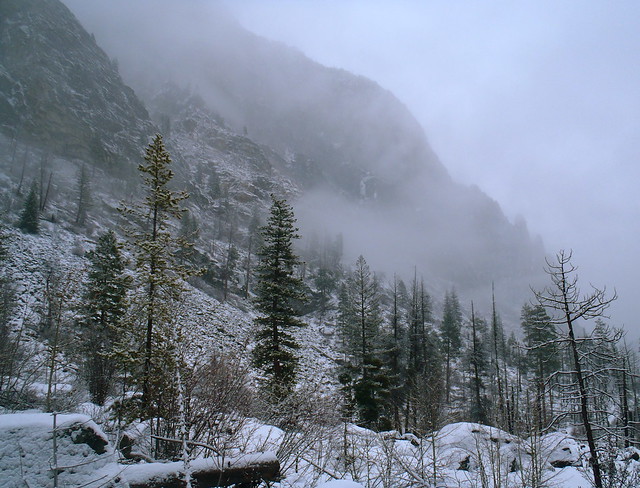 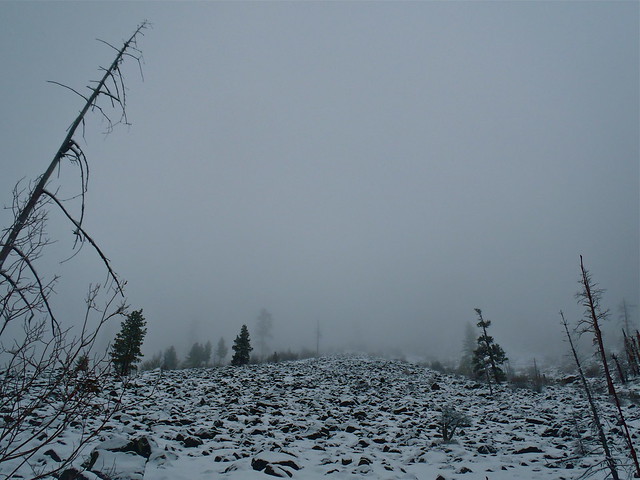 I arrived back at the trailhead around noon but the effort I’d expended had left me feeling like I’d been hiking all day. That said, I’m grateful I was able to check out another canyon and spend another night in the woods. However, I think my next overnight trip this winter will be on cross-country skis rather than snowshoes. Gliding across a snow-covered meadow on skis to a campsite holds a bit more appeal than heading up a possibly blowdown-filled canyon that has just enough snow to make snowshoes both a necessity and a burden.