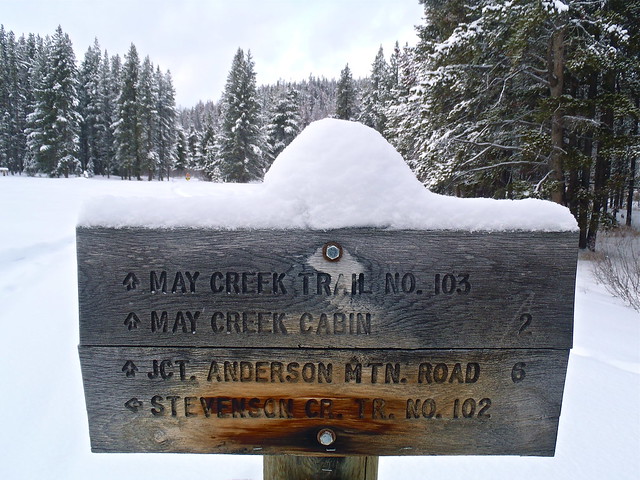 When I moved to Montana in late November from Kentucky, I had resigned myself to the notion that, short of investing in rather expensive four-season equipment and being bold enough to attempt to use it (likely solo, in an unfamiliar climate and landscape), that I would have to wait until late spring before doing any overnight trips. Cross-country skiing was recommended as an enjoyable alternative to hiking and when my rental deposit from my apartment in Kentucky arrived in my mailbox in almost the exact amount as a cross-country ski package from a local outdoor gear shop, the decision seemed to have been made for me. I would be getting into cross-country skiing, at least day trips, this winter. In another stroke of fortune, I learned that my clothes for backpacking and cold-weather bicycling would be sufficient for cross-country skiing.

After going on cross-country skiing day-trips for two consecutive weekends with others, I was absolutely hooked. As a backpacker, I couldn’t resist the temptation to explore my options for overnighting using skis. It was the Siren song of the mountains, I suppose, compelling me to seek out a way to spend a night in my sleeping bag before the end of the year. In another incredible stroke of luck, the highly recommended and exceedingly popular (it’s booked every weekend until April) May Creek Cabin in the Beaverhead-Deerlodge National Forest was available for a rental ($34) this past Saturday. An hour’s drive away and a two-mile ski in on a level but ungroomed trail to a rustic cabin. Combined with a relatively mild forecast of highs in the low 30s and lows in the low 20s, it was an opportunity that I couldn’t pass up. 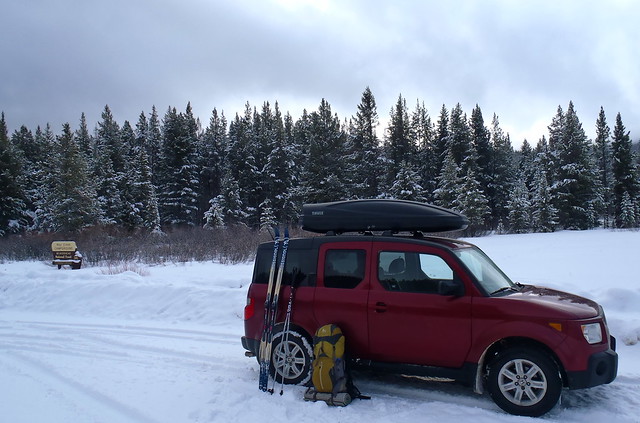 After seeking advice from experienced co-workers, double-checking my gear, and triple-checking the weather, I headed out with something approaching confidence.The scenic drive into the mountains helped me prepare mentally for the trip, my first since a three-night backpacking trip in October in Great Smoky Mountains National Park with a close friend, and before I knew it I was parked alongside a snowy state highway, hoisting my pack, clicking into skis, and gliding atop several feet of snow on the campground road that provided access to the trailhead.

Skiing through the forest on the way to the cabin was probably one of the most sublimely pleasant outdoor experiences I’ve ever had. The smell of the forest, the overwhelming amount of snow, the vastness of the landscape, the powerful quiet — all seemed to perfectly complement one another and comprised an experience infinitely greater than the sum their parts. Once the dense forest opened into a meadow, I knew I was nearing the cabin. 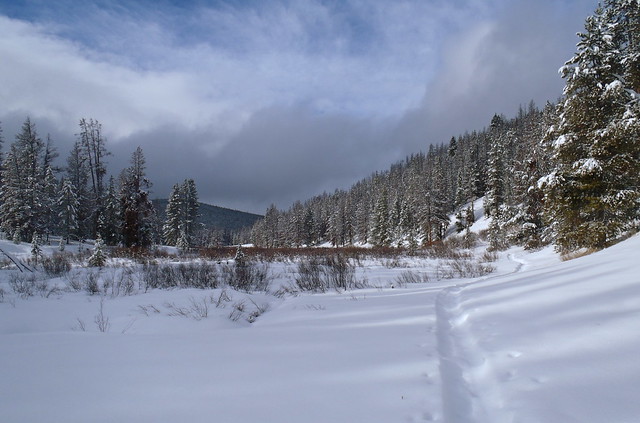 Although the trail was ungroomed, I was able to benefit from the tracks of previous skiers and covered the two miles to the cabin in just over an hour, arriving shortly after noon. Not to gloat, but I’m rather proud I was able to ski two miles in an hour, with an overnight pack, and without falling on my third time cross-country skiing. My prior two experiences were on groomed trails, but with significantly more downhill, and I’d taken several spills on each of those occasions, so it was nice to remain upright the entire time. The quality and quaintness of the cabin absolutely blew me away. I hope I wasn’t caught on a hidden camera because my giddiness and guffawing at where I would be spending the night would likely go viral on YouTube. The cabin seemed too good to be true — wood stove, propane lanterns, table and benches, bunks with thin mattresses, kindling and firewood — all there to be put to good use. As I unpacked and sorted my gear I laid out my plan for the afternoon. I’d go ahead and split all the firewood and kindling I planned on using while I still felt fresh before going on an afternoon ski further up the trail past the cabin. The woodshed was well-stocked, the axe was sharp, and the wood perfectly seasoned. It split like glass and burned like paper. I completed that chore in perhaps half-an hour. 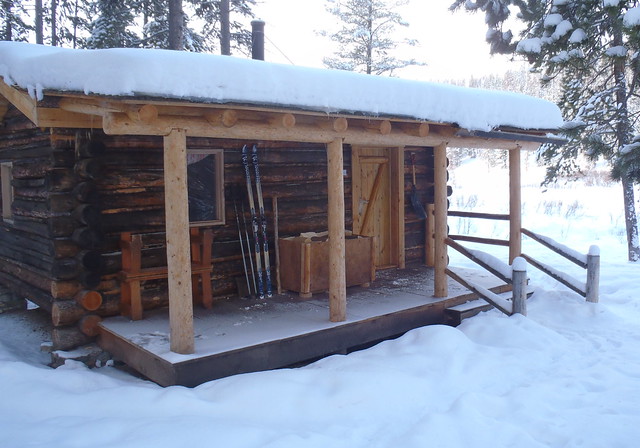 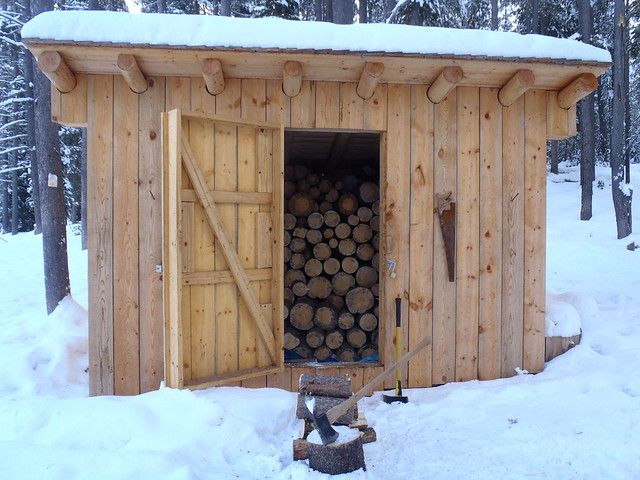 After blowing up my sleeping pad and laying my sleeping bag out on a bunk to loft up, I slipped my headlamp, a Clif bar and a whistle into my jacket pockets and headed out to ski. Just as I started out of the cabin I was greeted by two cross-country skiers who were out for the day. They were the only people I would see on my trip and we had a brief, but pleasant conversation, before I headed down the trail. For the next two hours I found myself casually kicking and gliding along the trail that paralleled the creek which flowed in front of the cabin. This section of trail was just as enchanting as the section I had skied in on and it was with considerably reluctancy that I left discretion prevail and turned around to head back to the cabin. 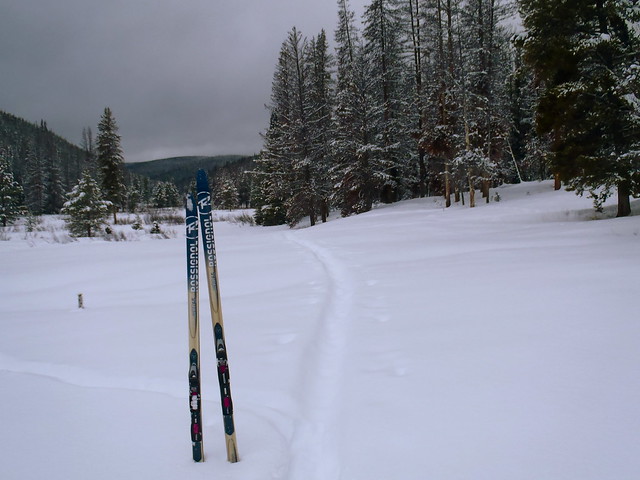 I stretched, enjoyed some hot chocolate, and started a fire to warm up the cabin up after returning. It took about two hours, but eventually the cabin warmed up enough for me to not be able to see my breath and for me to remove my jacket and my fleece cap, which was quite a luxury. I cooked a simple meal of pasta and tuna, spinach, and mushrooms using my backpacking cook kit rather than dirty the dishes in the cabin and use fuel for the two-burner propane stove. With snow beginning to fall outside, I ate my meal and read “Montana: An Uncommon Land” by K. Ross Toole, which is an engaging and informative history of the state. Several of the passages I read referred to landmarks within a few dozen miles of my location. It seemed like a fitting book to be reading and a fitting location to be reading it. 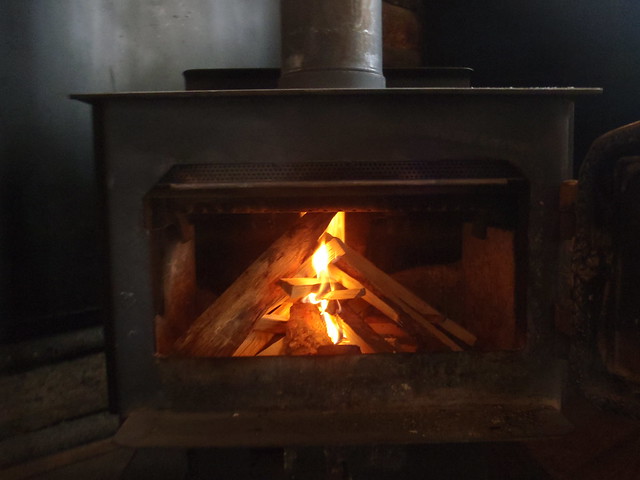 Tired from the day’s efforts and looking forward to a good night’s sleep, I stoked the fire and headed to bed shortly after 9 p.m. The fire kept the cabin so warm that my sleeping bag was used more as a simple blanket than as a cocoon. Other than a few times when I was awaken by strong gusts of winds I slept soundly until nearly 7 a.m. Between sips of coffee and bites of oatmeal I cleaned the cabin and packed my gear up, reluctant to leave but knowing that since heavy snow was forecast for the day that it would be wise to allow plenty of time for my travels, both on skis and in my vehicle. I locked the cabin up around 9 a.m. and stepped off the front porch into a steady snow that added to the charm of the landscape without significantly limiting visibility. 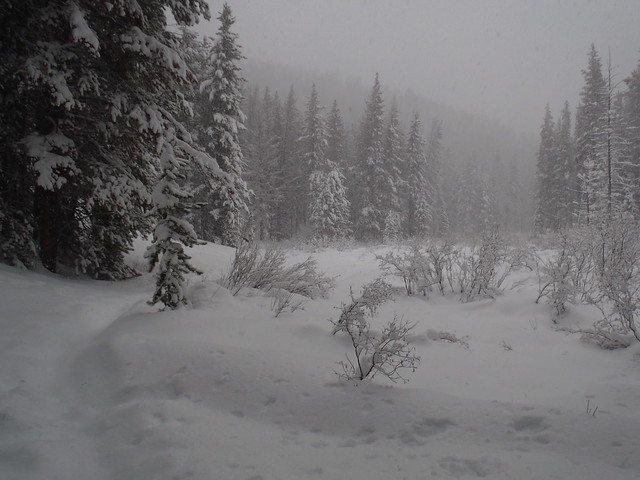 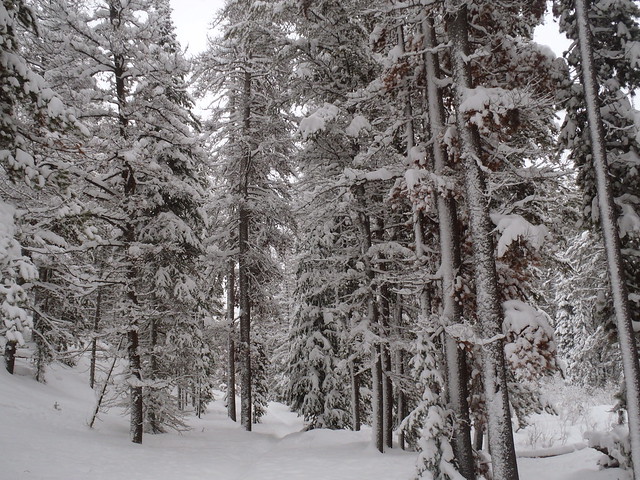 Perhaps 8-10 inches of snow had fallen overnight and the ski out was more labor intensive because of the necessity of breaking trail. I seemed to sink in more often than not and, although I was still able to “ski” my forward progress was slowed by the resistance the fresh snow provided. It took me about an hour and a half to reach the trailhead, but I wouldn’t have complained if it took twice as long, as I was thoroughly enjoying the effort and was captivated by the scenery. 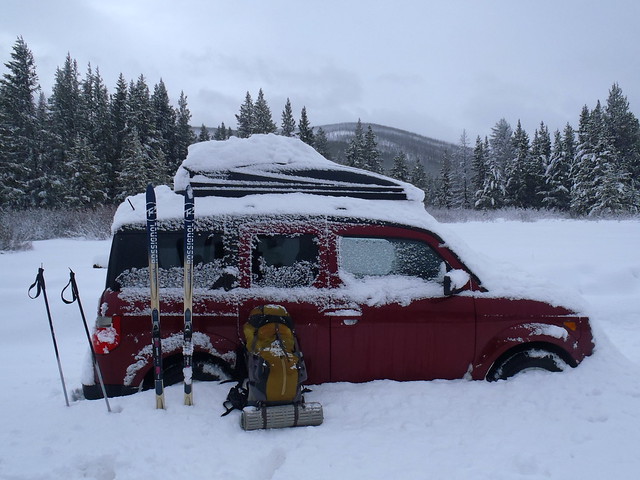 After digging my car out so I could drive from the roadside pull-off onto the highway I started the drive back home. I’d only gone a few miles before I saw a motorist struggling to shovel her car out onto the highway from a trailhead access road that was unplowed. She and some friends had spent the night at a cabin located along some cross-country ski trails and were finding themselves having difficulty getting out of the parking lot. After trying to help her shovel out for a few minutes, we realized that due to limited resources and the nature of the problem that our attempts would be futile. I ended up giving her a ride to a nearby ski lodge where she could arrange for further help (no cell phone service was available at the trailhead).

The snow on the drive down from the mountain was very thick at times until I lost enough elevation and it transitioned into rain. I arrived back home with plenty of time to unpack and unwind before the work week began. Without a doubt, this was one of my top five solo backpacking trips. I’m now cautiously contemplating the idea of trying to become prepared for a cross-country ski trip using a four-season tent as my shelter, but things would have to really line up well for that to happen and I’d need to make a few significant purchases. So, if anyone can put a good word in to Santa, have him bring me a four-season tent, a -10 degree down sleeping bag, and the appropriate clothes. Hopefully I’ll be able to get out sooner rather than later, but if not . . . wow, what a great last backpacking trip of 2014. I’ll have to make sure to start 2015 with a well-chosen and well-planned trip to set the bar high for a new year in a new landscape.