The first weekend in April had the subtle signs of spring and I was fortunate enough to get out to the Red River Gorge. I left Stanton about 7:30 a.m. on Saturday with enough gear to comfortably spend the night and enough food for two days — total weight about 20 pounds. I packed the gear into the panniers on my bicycle and set out on a roundabout route to the Red River Gorge.

Other than checking out an overlook a few miles down Hatton Ridge Road, my plans for the day were relatively loose. I usually plan my trips out pretty thoroughly, but the mild weather and my familiarity with the Red River Gorge led me to approach the day with an open-ended itinerary. All that was certain was that I needed to be in the central area of the Red River Gorge to meet up with some friends on Sunday morning for a hike. It was a good thing I wasn’t in a hurry, because the startling amount of blowdown on Hatton Ridge Road severely slowed my pace. 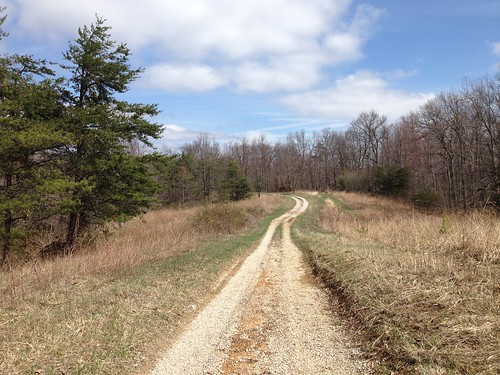 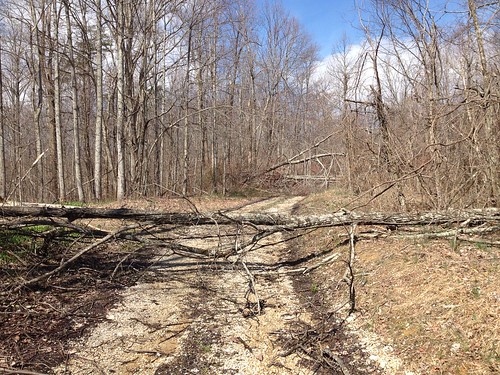 As anyone who’s hiked with me can attest, I’m not normally one to complain about having to exert a bit of energy to achieve forward progress in scenic areas, but man . . . this was bad. There must’ve been at least 10-15 blowdowns that completely blocked the road, requiring me to lift my bike (28 pound heavy-duty touring bike and 20 pounds of camping gear) over the fallen trees or navigate through briars, shrubs and assorted undergrowth to bypass the obstacles.

Once I got on the other side of the blowdowns and reached the short trail to an overlook, I realized that I had backed myself into a bit of a corner. I had no desire to re-cross all the blowdowns only to have to ride 25 miles or more to reach the area of the Red River Gorge where I wanted to camp.

I parked my bike and headed out to the overlook to ponder my options: 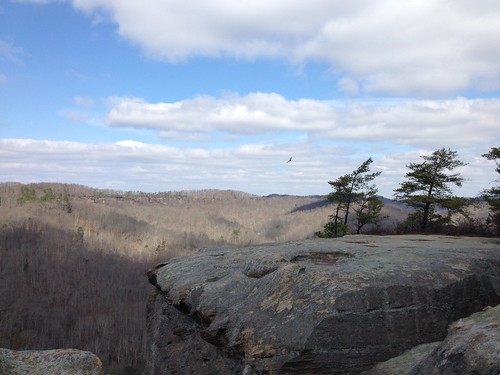 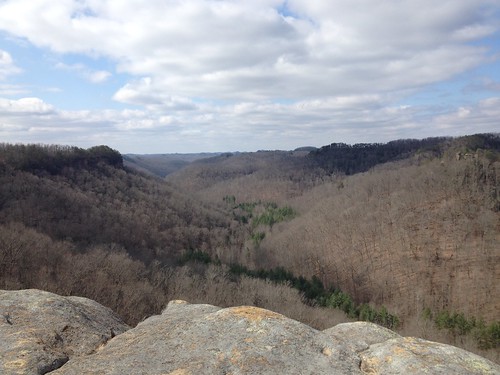 While soaking up the incredible view and enjoying the peace of such a location, the idea came to me that I should simply walk and ride (when possible) my bike down the Powder Mill Branch. This trail is the only trail designated as being open to bicycles in the Red River Gorge and it would allow me to connect to Indian Creek and enjoy a relatively leisurely ride to the central Gorge — specifically Tunnel Ridge Road, where I had decided I would camp. 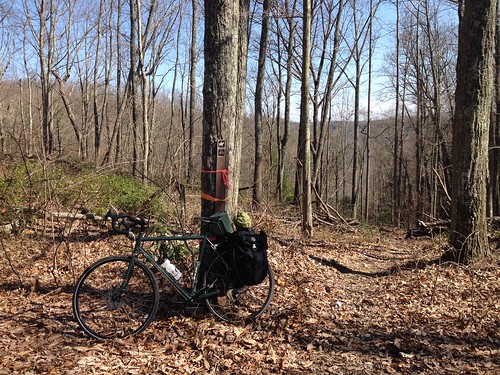 I was a bit nervous standing at the beginning of the Powder Mill Trail on Hatton Ridge Road and thinking about what might lay ahead:

What if the blowdown on the trail is as bad or worse as the road? (I convinced myself it shouldn’t be too bad because it was on the leeward side of the ridge.)

What if horse use had caused severe erosion and I’d be hiking through quagmires and horse crap? (I hadn’t seen much sign of horse use on the road, but still a concern).

What if the trail was just in poor condition? (Unknown)

What if I got to Indian Creek and it was too high to safely cross? (A real concern as the area had received over 2 inches of rain a day or so before — if it was I knew I’d just camp on the bank and hop it had dropped enough to cross the next morning.

No sense worrying about it . . . I’d find out soon enough and figure it out as I went along. If anything else, it would be a micro-adventure race against sunset without a registration fee or any other competitors.

Turned out I was in for a pleasant surprise. All my concerns were unfounded and the trail was a great detour from biking and allowed me feel a sense of immersion in the landscape in a different way than when cruising along on a bike. 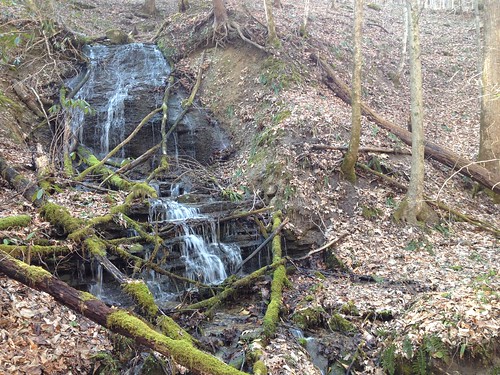 The sounds of moving water were almost constant, Powder Mill Branch and about a half-dozen other named and unnamed tributaries and tributaries of tributaries provided a great soundtrack to the 2.3 mile hike. There were even a few cascading wet-weather drops that I stopped to check out. Although I walked alongside my bike for the most part, there were several sections where I was able to ride for a hundred yards or more before having to dismount for an incline or an obstacle. Other than a few slippery, muddy, steep sections the trail was in good shape.

I encountered two hikers about halfway through the trail and found out that the crossing was easily manageable and not of any safety concern. Granted, crossing it barefoot and carrying a bike wasn’t exactly something I was looking forward to, but it was good to know that it was only brief, mild discomfort and not danger that awaited me. 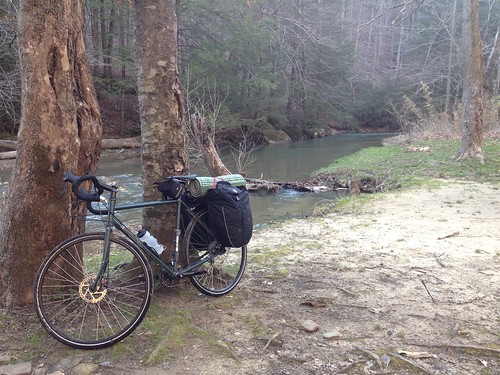 I crossed Indian Creek without incident and then began pedaling toward Tunnel Ridge Road. The traffic on the road was very light for a Saturday and I enjoyed the route. Going through the Nada Tunnel on a bicycle is a neat experience and the uphill before and downhill after provided a fun challenge and subsequent reward.

I stopped for water at the rest area in Slade before continuing up the hill towards Tunnel Ridge Road. This hill was a bit more of a challenge than the hill leading toward Nada Tunnel, but in the proper gearing seemed almost casual. I turned onto Tunnel Ridge Road and pedaled along with the vibrant gradients of a sunset on my left, punctuated by the near-molten, red-orange orb of the sun.

I reached the end of Tunnel Ridge Road/Double Arch Trail at twilight and checked out a few nearby overlooks before setting my tent up and fixing dinner (as usual, pasta with fresh spinach and mushrooms). A slight chill was in the air as I ate dinner and read a short story by Jack London. I’d hoped to stay up and do some stargazing, since the crisp and clear night would provide good visibility, but I was so tired that I went to bed around 9:30 p.m. Biking 42 miles with my backpacking gear and hiking about 5 miles over the course of the day was a recipe for a sound night’s sleep. 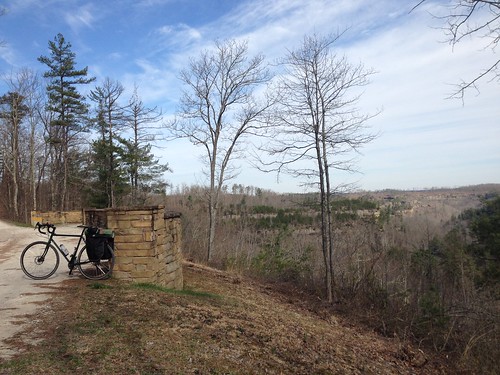 I woke up shortly after sunrise to cool temperatures and sunshine, packed up camp and headed to a parking area on Tunnel Ridge Road to meet up with friends for an 8-mile hike – mostly a loop, but with two out-and-back trips to overlooks. My phone was low on battery at this point and I didn’t take any pictures, so I’ll include a few pictures from the highlights of the hike that were taken on previous trips: 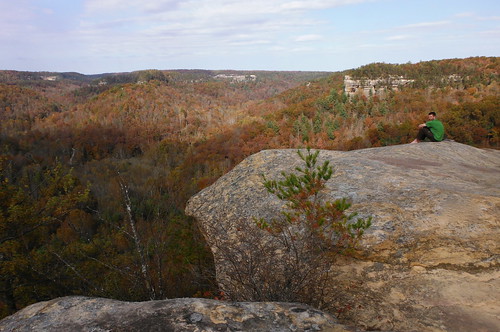 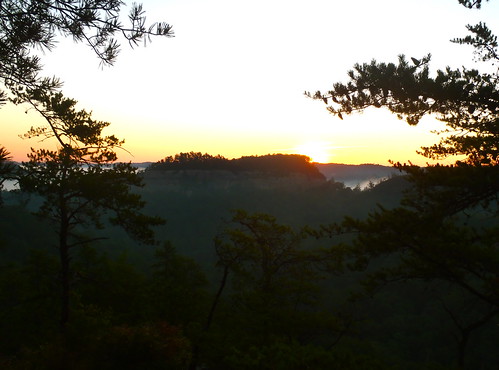 After the hike, we went out to eat at Sky Bridge Station in Pine Ridge (corner of Hwy. 715 and Hwy. 15 in the Red River Gorge; log cabin building), which I would recommend to anyone looking for a good quesadilla, cold beer or a gourmet hot dog. Due to time constraints, I reluctantly accepted a ride home instead of biking back.