I got invited by a friend at 5:30 on Thursday to leave Friday morning and head to Cosby Campground in the Smokies for the weekend to meet up with several other campers/hikers. In exchange for the ride and the campsite, I agreed to split cooking duties for the first night and breakfast on Saturday. After that, my dues paid, I’d head out solo up Snake Den Ridge Trail to Otter Creek Campsite (#29) rather than accompany the group to Mt. Cammerer for a dayhike. I’d been to Mt. Cammerer on a previous trip and decided I’d rather spend some solo time lounging around a backcountry campsite than brave the crowds for the spectacular view. I’d also stayed at campsite #29 on a previous trip, but would be approaching it via a different trail this time. 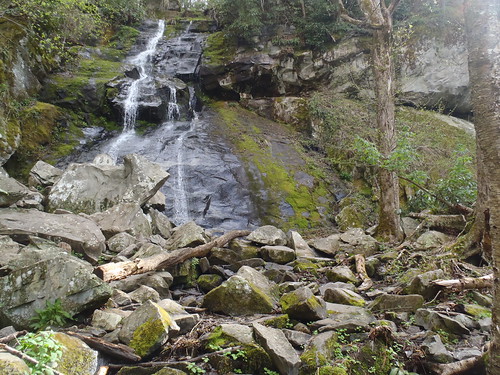 After arriving at the campground and setting up, we went on a mid-afternoon stroll (about 4 miles roundtrip) to Hen Wallow Falls — a cascade off the Gabe’s Mountain Trail. There were several nice patches of wildflowers along the wide trail to the cascade and it was a pleasant hike.

Several members of the group were forestry professionals and it was a novelty to be able to ask pretty much anybody within earshot “What tree is that?”, “What plant is that?”, “Why is that tree growing like that?”, “Is that a burn mark or just sap or fungus?” and get an accurate and articulate answer. Hiking with people smarter than you definitely has incalculable benefits.

Back at the campground, one gentleman served up venison stew for dinner while I provided spinach, mushroom and red pepper quesadillas as appetizers. Discussion around the campfire featured diverse topics such as: the health and composition Eastern forests past, present and future; recently published demographical and statistical analysis of persons who reported being abducted by aliens; and events in Larry McMurtry’s novel “Lonesome Dove”, among other intellectual and practical topics.

Breakfast in the morning was breakfast quesadillas: scrambled eggs with jalapeno and spring onions, salsa, bacon and shredded cheeses inside a tortilla, then placed in a skillet until the tortilla has been browned to crispness on both sides. A genuine delicacy, in my humble (and accurate) opinion. 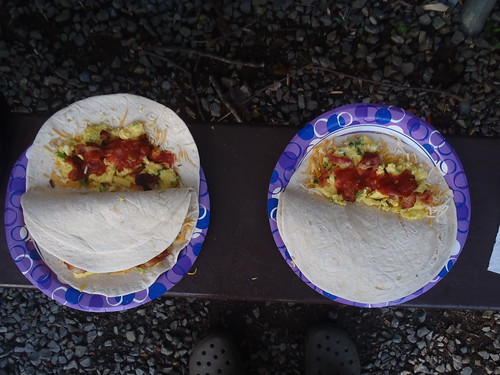 Once the quesadillas were consumed, my usefulness to the group (and thereby my de facto indentured servitude) ceased and I packed up my backpack and started up the Snake Den Ridge Trail, a 4.8 mile trail whose elevation profile is basically a 45 degree angle in the guidebook description — I would gain more than 3,000 feet before beginning a descent to the campsite. 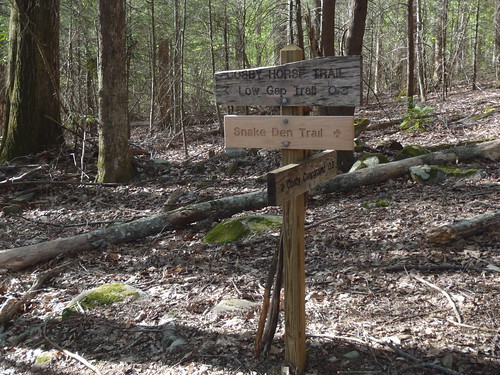 The wildflowers along this trail were absolutely stunning, with trilliums, phlox, spring beauties and yellow trout-lily being the highlights. The trail crossed a few small streams and had one minor vista as it climbed up the mountain toward the junction with Maddron Bald Trail, which I would take 1.6 miles downhill to the campsite. I made good time on the trail and was at the campsite by 12:30. 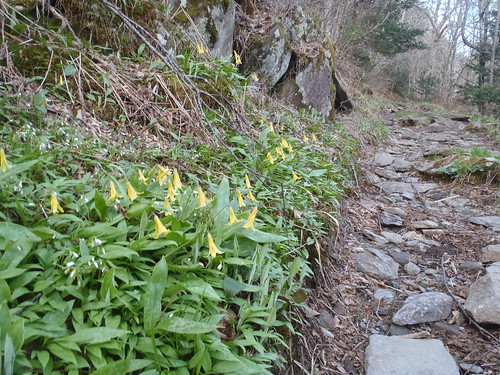 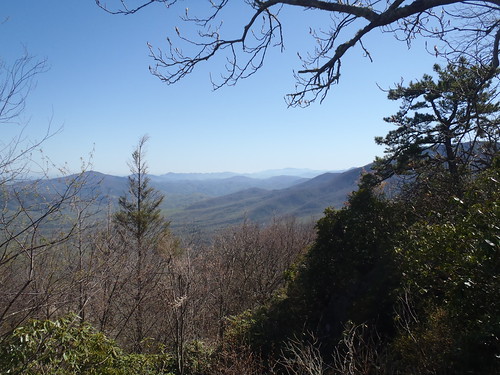 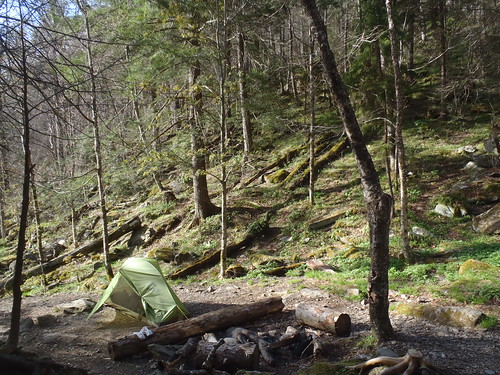 I knocked out the usual camp “chores” with efficiency but no sense of urgency prior to setting up my hammock and making a cup of coffee. This trip was an unexpected but much needed chance to simply sit around in the woods with no agenda, no schedule, no interruptions — just myself and the natural surroundings. Despite it being a Saturday, with no rain forecast and temperatures in the mid-70s, I only saw two other hikes for the much-too-short 24 hours that I was in the woods on this micro-backpacking trip. I felt a particular pleasure in the irony of this, since the Smokies are America’s most visited national park.

I passed the afternoon by checking out the wildflowers on the trail leading past the campsite, taking a few brief catnaps, studying the map and planning my next trip to the Smokies, and reading a book of poetry by poet and songwriter David Berman. It was a nice change of pace from the classic short stories and novels I’d gotten in the habit of reading on my recent trips. Oddly enough, this book (“Actual Air” by David Berman, published in 1999) had accompanied me on my first backpacking trip to the Smokies in 2008. 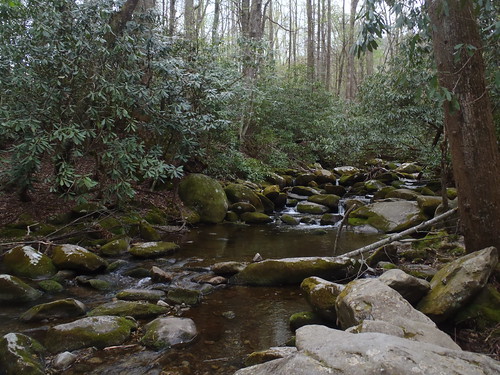 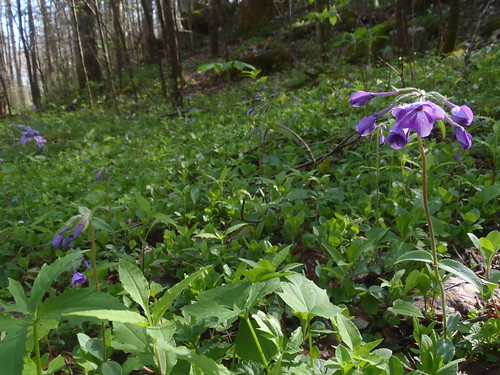 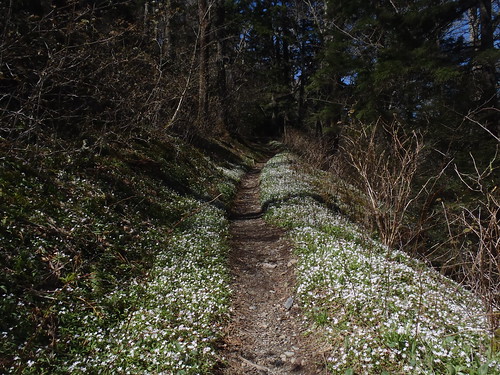 Sitting in the hammock, with a small stream tumbling down the mountainside to my left and the vibrancy of spring all around me, the poetry perfectly complemented the introspective but care-free mood I happened to be in that weekend. Ranging from the amusing, the enlightening and the profound, every few minutes a turn of phrase or observation in the text would cause me to pause for a considerable time and stare off into the clouds contemplating the various simplicities and complexities of existence and emotion. Here’s a stanza I found to be both compelling and entertaining:

All this new technology
will eventually give us new feelings
that will never completely displace the old ones,
leaving everyone feeling quite nervous
and split in two.

The campsite was cozy, but rocky. Fortunately, between laying either in or on my hammock and sleeping pad I was never aware of the rocks other than from a practical standpoint (“I can set my boots on that rock”) or a visual standpoint (“That’s kind of a strange-looking, mossy-covered rock”). The sunset was visible through the trees and looked as it would been terrifically colored and composed if viewed unobstructed. But I was more than happy with what I got to see.

I ate dinner just prior to sunset and went to bed shortly after. I was on the trail by 6:30 in the morning; I packed by headlamp as the stars disappeared from the sky and the pre-dawn glow of the morning began. 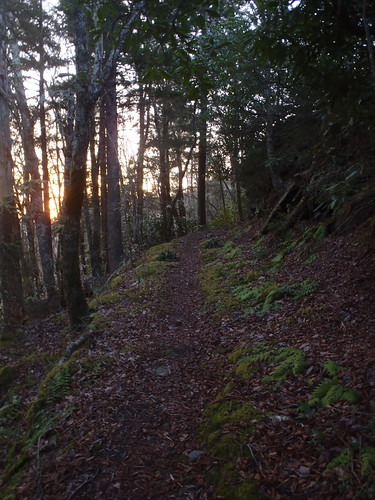 I made it back to camp by 9 a.m., re-tracing my steps from the day before, and lounged around camp with the rest of the group before we split up our separate ways. We fit in a quick dayhike before stopping by a bookstore on the way to the interstate and the most exciting events of the afternoon and evening were: an awful allergy attack suffered by myself and getting stuck in traffic on I-75 for two hours.