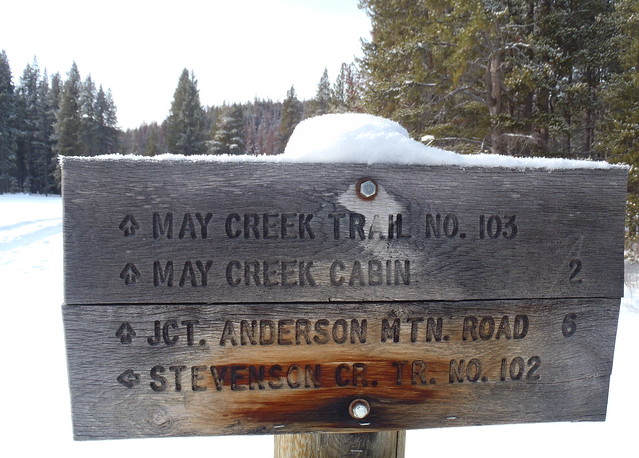 Beauty and Pleasure. Indifference and Power. Nature seems to have the inimitable ability to demonstrate these concepts in their most pure form; in their essence. While I’d dipped my toe into this notion on previous trips over the years, I experienced complete submersion on this particular cross-country skiing trip in the mountains of Montana. I can speculate on reasons why, but an accurate definition or explanation is beyond my combined abilities of observation and expression. Maybe next time. Maybe never. No harm in the pursuit. 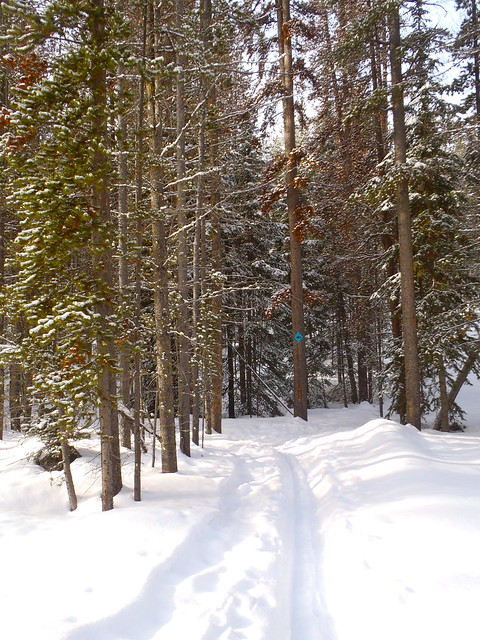 Skiing along on tracks so perfect they seemed almost machined, I glided through the conifers alongside a frozen, snow-covered mountain stream and was almost overwhelmed by the pleasure of the experience. Attempting to soak in and appreciate the beauty of the landscape seemed to require more effort than the skiing. My pack — crammed with a minimal but cautious amount of equipment for the overnight trip — seemed to be a friendly reminder of my freedom rather than a nagging weight that I was anxious to remove. 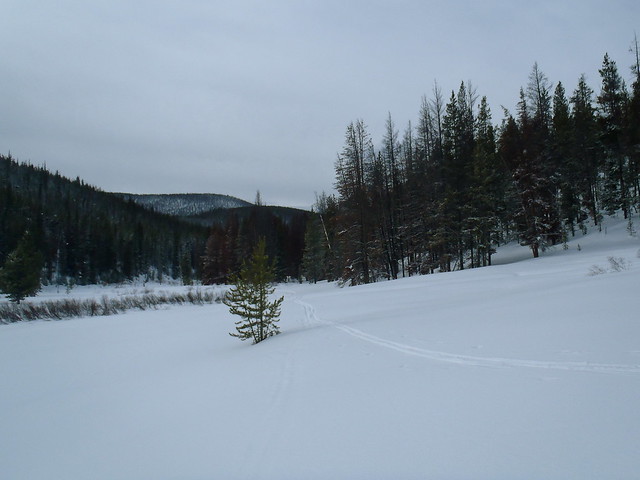 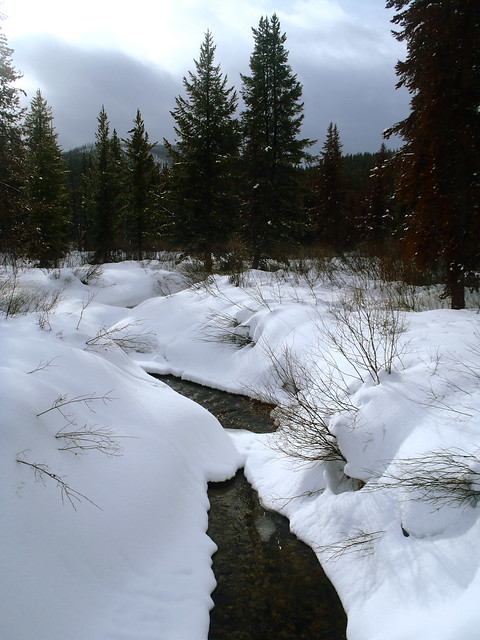 In perhaps an hour I covered the two miles to the meadow and cabin that I’d stayed at a month prior. Fragments of blue peeked through the clouds. Temperatures in the mid-20s and a light breeze helped me stay cool despite the effort I was exerting. After a brief pause I continued further up the trail to look for a campsite in one of the meadows I recalled being a mile or so up the trail. The tracks and snow conditions made for some of the most sublimely pleasant skiing that, as someone who only recently took up the activity, I had experienced. Cross-country skiing with an overnight pack isn’t necessarily thrilling, or pushing the limits of athleticism, but it brought me a sense of contentment that was immeasurable; the opportunities for uninterrupted contemplation were innumerable. I passed one meadow but wasn’t ready to stop skiing. I pressed on to another, more expansive meadow, before leaving the trail and gliding a few hundred feet through a few inches of snow on top of a perfect crust. 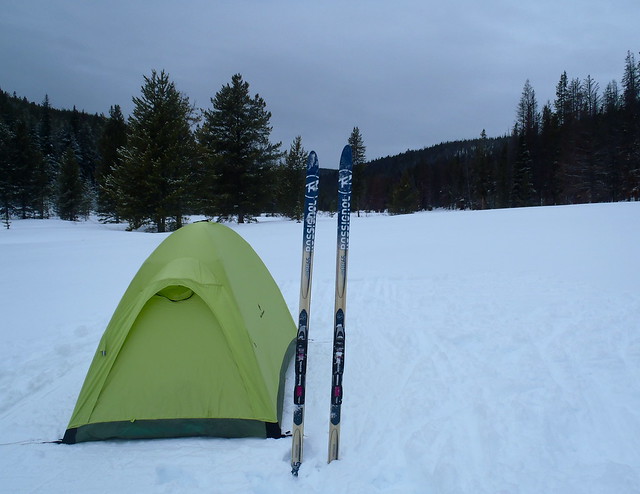 This would be my second time camping on significant amounts of snow and I was looking forward to the challenge. The rewards were readily apparent. The forecast predicted several inches of snow, and some accompanying winds, in the evening and overnight hours. I packed down an area with my skis for my tent and cooking area and waited for it to solidify. I took care to set my tent up with the head facing the prevailing wind, rather than set it up broadside or with the foot (and door) facing the wind and becoming banked with snow. I was especially pleased in regard to what would prove to be the effective anchors for the guylines that I rigged. I’d gotten the tip from a book on winter camping and it, along with melting snow for water, was a skill that I was putting to use for the first time.

Anxious to enjoy the rest of the day, I organized my campsite and tied up any loose ends — figuratively and literally — before skiing further up the trail. The tracks continued to be nearly divine and led me through an enchanting evergreen forest corridor. I skied until the trail started to slowly gain elevation and the tracks appeared to be less used. As desired, I arrived back in camp with slightly less than two hours of daylight left. 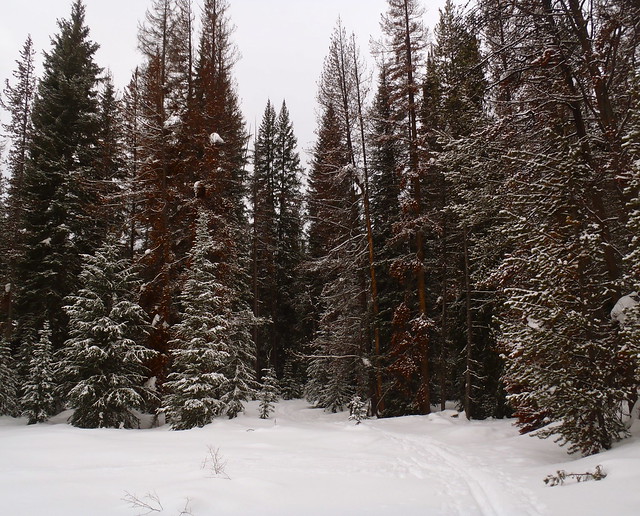 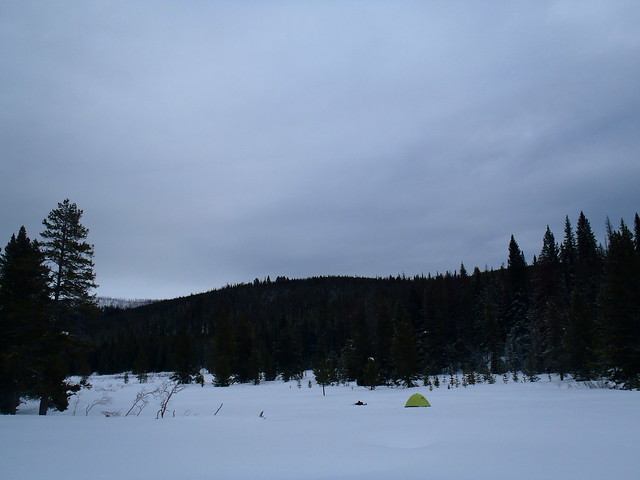 This is the point where I wish I’d put in effort on the front end instead of the back end. There was a light snow falling and steady, but not “strong”, wind as I settled back into camp. I’d anticipated the weather and brought an ultralight sil-nylon tarp (6’ by 8’ with extra long guylines) that I use as a dining fly on rainy backpacking trips. In an incredible feat of mental gymnastics, I somehow convinced myself that “There’s no reason to fool with setting up the tarp, I’ll be asleep or at least in my tent by the time the weather really gets rough. I’ll just relax here and read, stretch a bit, sip some hot chocolate, and enjoy twilight in the mountains. No need to batten down the hatches over a few snow flakes and a breeze.”

And so I did just that. Read, relaxed, stretched, listened to music, and watched the light fade from the sky. And watched the snowflakes come down. And felt the wind become stronger and steadier. I’ll put it this way — trying to rig a tarp in the dark, in blowing snow, while untangling knots and cinching out guyline cords, is not exactly an experience I want to make a part of every trip I go on. That said, I did end up with a decent dining shelter. The ridgeline of the tarp went from ski to ski, and the guylines went to ski poles and a snow shovel. It was set up in such a way that the wind was completely blocked but the front was open for me to cook and stretch out without any restriction of movement. I wish I’d gotten a picture, but it was too dark to turn out well and I didn’t really feel like leaving the shelter or the tarp without a compelling reason. All’s well that ends well.

I cooked dinner (pasta and tuna with spinach and mushrooms — I remembered all the ingredients this time, plus chocolate bourbon balls for desert), ate some additional snacks to get me through the long night, closed down camp, and prepped to get into the tent. I took precautions to ensure that nothing would be covered up by the falling snow or misplaced. I carefully organized things in the tent before entering. Snow, cold, and wind make for difficult conditions to play the “Where’s my _______ (headlamp, Clif bar, extra socks, ipod, etc.)?” game that even the most experienced backpacker sometimes finds themselves participating in. 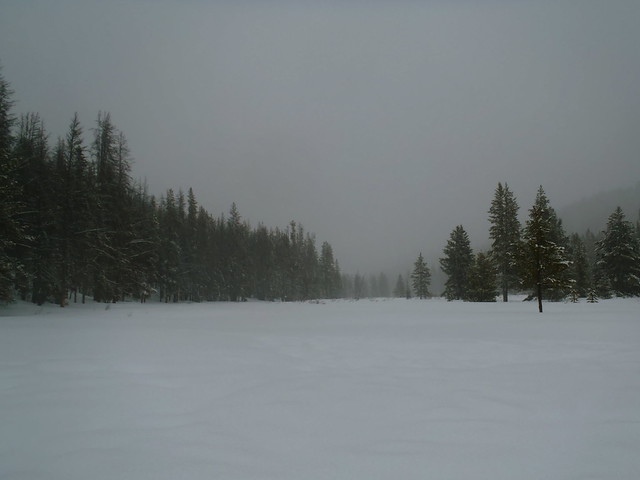 Once I was confident things were in order I brushed myself off and entered the sanctuary of the tent. I put the layers I wouldn’t be sleeping in inside stuff sacks to use as pillows and put my ski boots in a stuff sack at the bottom of my sleeping bag, along with a bottle of warm water I’d prepped. After acquiring absolute comfort in my feather-filled form of climate control, otherwise known as a sleeping bag, I did a bit of time travel via timeless music and literature. The Yukon circa 1898 thanks to Jack London, “Europe ’72” with the Grateful Dead. Not a bad way to spend a Saturday night. Snow continued to hit the tent with a muted melody all its own and the gusts of wind pushed the walls of the tent at their whim. My comfort was fortunately unaffected by these circumstances. Proper gear let them add to the enjoyment rather than detract.And a good thing, too, as nature has no “on” or “off” switch. No thermostat, no low, medium or high setting. We either bring our own means of adjusting our comfort to meet nature’s conditions via Gore-Tex, down bags, and sil-nylon shelters or we endure the consequences. 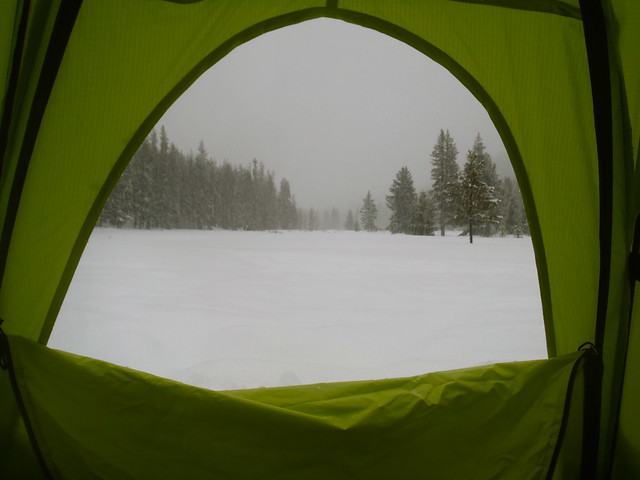 I woke up an hour before sunrise to, and perhaps because of, silence. Snow wasn’t falling on the tent like it had been for the past twelve hours and I peered out into a breathtakingly quaint and beautiful landscape. It seemed unfathomable how much charm a few extra inches of snow could add to an already exceedingly captivating scene. Fresh snow covered the meadow and clung to the trees along its edge. A brief break in the clouds allowed pre-dawn light to peek into the small valley from the east. By the time I got dressed to retrieve my food bag it had started snowing again. While retrieving my food bag, I was quickly informed that the snow was much prettier to look at than to ski through. It had a consistency almost like mashed potatoes. It was definitely going to be a double-dose of coffee kind of morning. 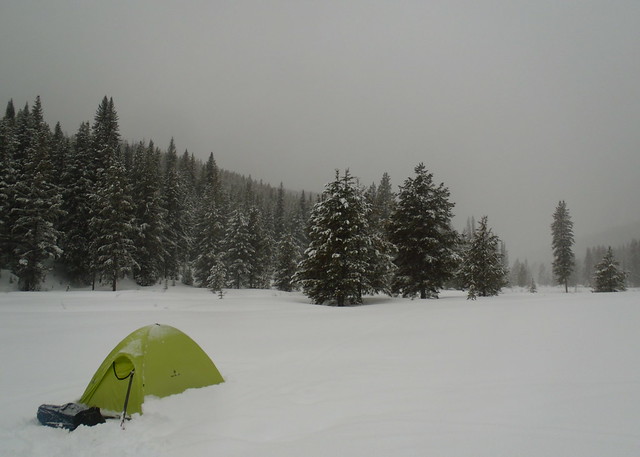 Once I packed up and hit the trail, I fully appreciated just how much of a difference snow conditions can make. Covering the mile to the junction with the cabin was unimaginably arduous compared to the effort recovered to travel the same distance the previous day. I expressed my appreciate out loud, and in no uncertain terms, when I realized that the skiers who had stayed at the cabin overnight had already left and that the trail was broken all the way back to the parking lot. I felt like I owed them an REI gift card and a cold beer. 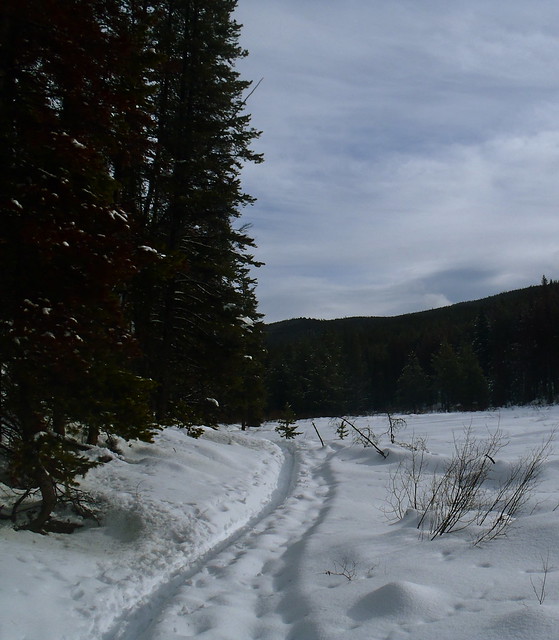 For the remaining two miles to the parking lot I was able to put more of my mental energy on appreciating the day and the scenery and was using much less physical energy as well. Quite a change form the first mile where every iota of focus and ounce of muscle were working to keep me upright and moving forward.

I arrived back at the black strip of pavement slicing through the mountains, and my car, shortly after noon. This was the third weekend in a row that I’d been able to head out on an overnight trip and I was thankful that Monday was a holiday. I was looking forward to being able to rest up a bit. I spent a good chunk of that day doing a bit of minor gear maintenance that had revealed itself to be necessary on my recent trips — re-applying DWR to my sleeping bag, washing a softshell jacket and pants and applying DWR, and patching a mysterious hole that had appeared on the back of my down jacket. Just generally organizing and maintaing backpacking gear.

As much as I’d like to head out again as soon as possible, I’ve got a few real and perceived obligations that will keep me from doing an overnight trip for a week or two. I’m hoping that my next trip will be for two nights rather than just one, but I’ll take what I can get. Nature always seems to provide more than I ask for anyways.