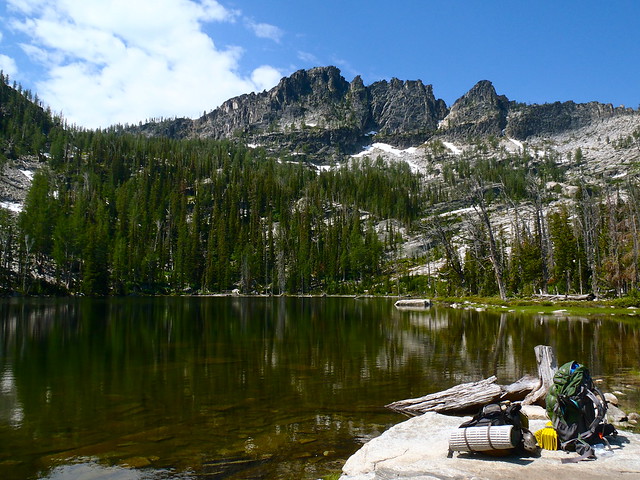 A simple description of a pleasant weekend: trail, fainter trail, lake, peak. Reverse. I’ll flesh that description out somewhat in this trip report, but will avoid waxing too poetic about the two-night trip my friend Chris and I took to a subalpine lake in the Bitterroot Mountains on an unseasonably warm weekend at the end of June.

We arrived at the trailhead mid-afternoon, split a banana in the shade, stretched, and then headed down the trail. Located at approximately 5,700 feet along a forest road, the trailhead gave us somewhat of a head-start on gaining elevation and beating the heat that would be the defining the characteristic of the weekend. Highs were forecast in the upper 90s and low 100s for the Bitterroot Valley and Missoula, with lows in the 50s. The lake we would be camping at was over 7,000 feet, which would provide some reprieve from the heat as well as the opportunity to swim in clear, cold water in a beautiful setting. Certainly a more appealing option than sitting inside with fans and air conditioners on full blast. 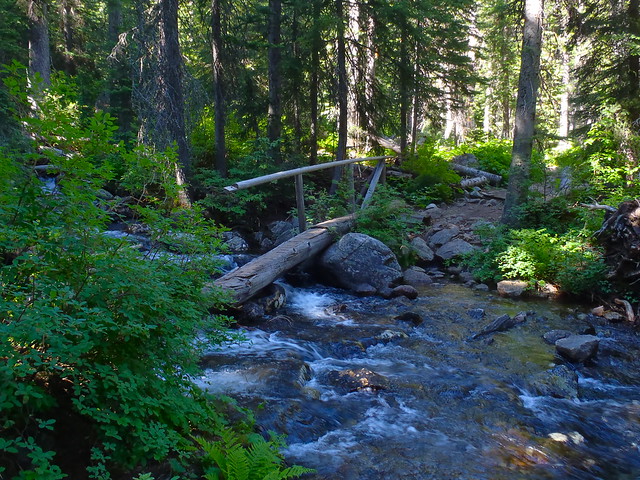 Our route to the lake was on a well-maintained trail for the first 2.5 miles or so, then on an unmaintained trail for just over a half-mile (with 600 feet of elevation gain) to the lake. The first mile of the trail provided little shade, but after rounding a bend and heading into the Camas Creek drainage a pleasant fir forest provided much appreciated shade. The subsequent section of trail to the junction was built at an decidedly non-strenuous grade and the sound of the creek, shade, and fragrant forest made for delightful hiking. We checked the map once or twice, along with guidebook descriptions, to make sure we didn’t overshoot the unmarked junction where we would take an unmaintained trail, cross Camas Creek again (this time without benefit of a bridge), and head up to the lake. Our studying paid off, as we located the junction without any trouble. After crossing Camas Creek, which was fortunately narrow, calm, and shallow, we took a break before the final push to the lake. The unmaintained section of trail that led to the lake was in remarkably good shape and, while not exactly a casual stroll, wasn’t insanely difficult. We made good time on this stretch and arrived at the lake with an hour to spare before the sun dipped behind the mountains, with another hour or two after that before darkness. 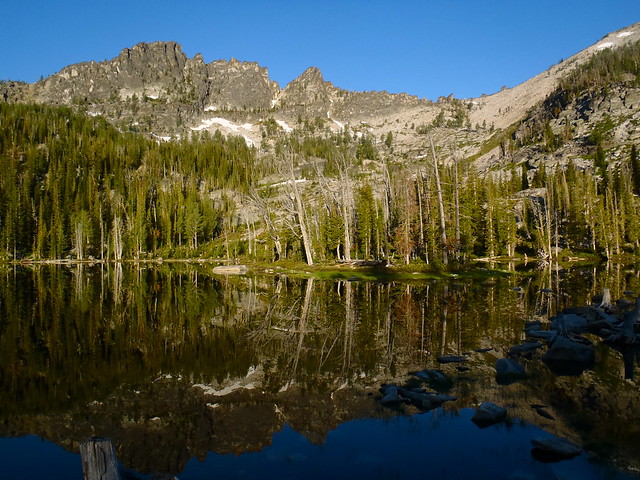 The lake was absolutely gorgeous. Crags, peaks, forest, and some snow on the higher slopes provided the perfect backdrop for the body of water. A rock jutting into the water made for a perfect place to eat our dinner, which was Mexican rice and jerky wraps with fresh guacamole made in camp and chilled in the lake. The moon rose early and we were entranced by the shimmering moonlight on the lake, as well as the stars, until we headed to our tents for bed.

After a quick breakfast the next morning we set out for the hike up East Camas Peak. **** more details ***. The hike up was easy enough. No major route finding issues, a partially shaded approach (which had us sweating much earlier than we would have thought, both due to the steepness and how quickly the day warmed up), and nice views down into the Upper, Middle and Lower Camas Lakes. We took a short break before leaving the trees and beginning the enjoyable scramble up the boulders and stable talus to the peak. 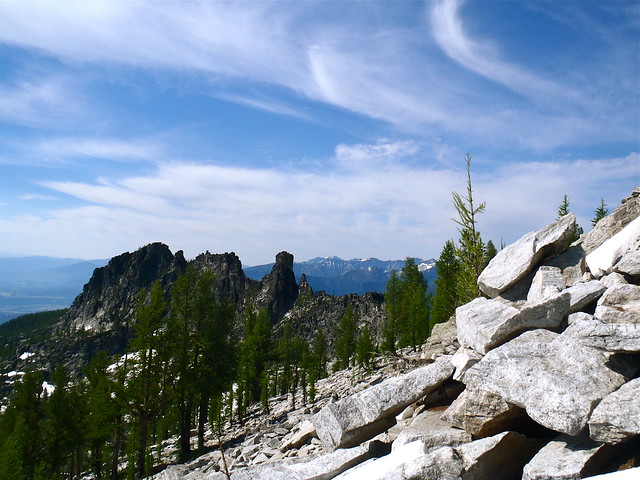 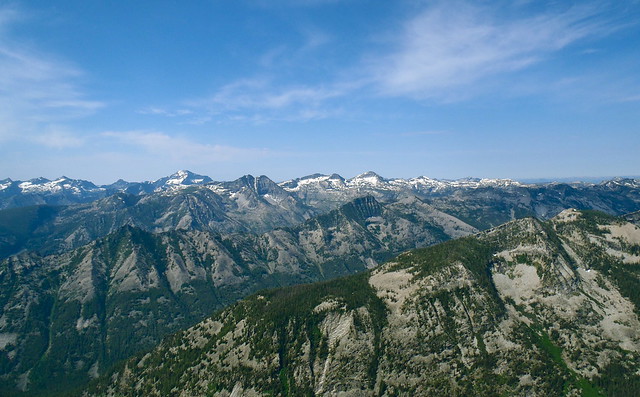 Once out of the trees, the views into Kidney Lake, the crags, and the surrounding mountains were remarkable. We arrived at East Camas Peak mid-morning on a clear, sunny day with views of the Bitterroots and distant mountain ranges stretching before our eyes. We stayed atop the peak for well over an hour, enjoying the vista and walking along the ridge a short distance. A light breeze kept the heat from being too noticeable and hydration and snacks kept us beyond content. As is usually the case, it was harder to leave the summit than to reach it — such places just compel you to linger.

Rather than return the way we came, we took a detour from the summit to pass through a gully and explore some of the cliffs at the base of the crags. The route down was reasonable in most places, but some spots with loose, gravelly dirt on steep slopes made us pay more attention to our steps than the scenery. However, we made it down without severe bodily injury or mental strain and enjoyed the fresh scenery and perspective on the lake. As we wound our way around the lake and back to our campsite we ran into two other campers and noticed that another camper had waded out to the island and pitched a tent. While it didn’t exactly feel crowded, after another group arrived any semblance of seclusion (or quite, as one group called for their dog about every five minutes until sunset) disappeared. Total domesticated population of Kidney Lake, Montana on the night of June 27, 2015 was seven people and five dogs. 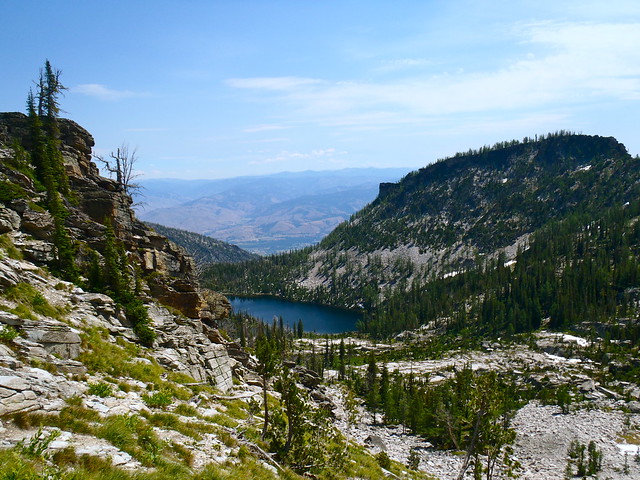 We took a lengthy swim around the lake upon arrival in camp; if there’s a better way to cool down and refresh after a hike to a peak then I haven’t found it. The afternoon and evening were defined by warmth and idleness. And mosquitoes. Bug spray worked well, but the insects didn’t exactly add to the scenery. We ate our dinner and decided that rather than confine ourself to our tents we would spread out on the rock and sleep under the stars. It had been a few years since I’d slept outside without being under a tarp, in a tent or shelter, or under a cliff overhang, and I’d forgotten how its charm. Waking up in the middle of the night to see stars rather than sil-nylon is quite a luxury. But there’s also something to be said for protection from the elements and the insects, so I don’t think I’ll be giving up the tent any time soon. 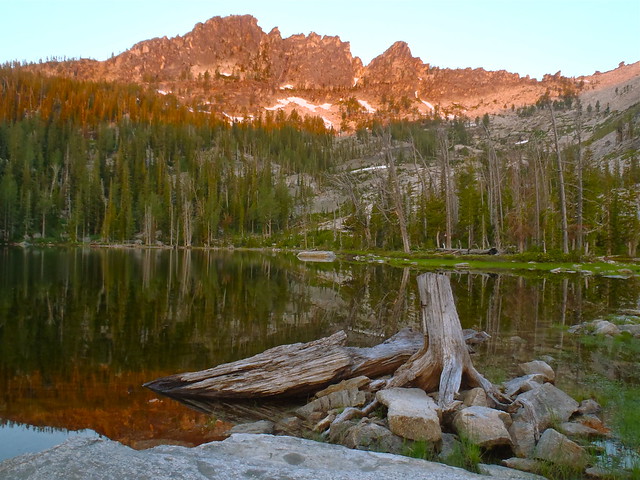 Up shortly after sunrise the next morning, we enjoyed breakfast in our sleeping bags as the sunlight illuminated the crags and brought light and warmth to the landscape. Needless to say, we didn’t remain in our sleeping bags for very long. The other campers left the lake early, with the last group to arrive being the first to leave, and within only a few hours of waking up we had to the lake to ourselves again. After packing up our gear and wading around for a bit we headed down the trail as well, leaving the lake by noon and arriving at the car around 2 p.m., just as the heat began to really crank up on a record-setting day. All things considered, I think we had the right idea for beating the heat.A trip that was relaxing, but not lazy. With Kidney Lake being such a short hike, close to town, and with such amazing scenery I imagine I’ll be headed there a few more times before the snow falls. And perhaps a time or two after that.