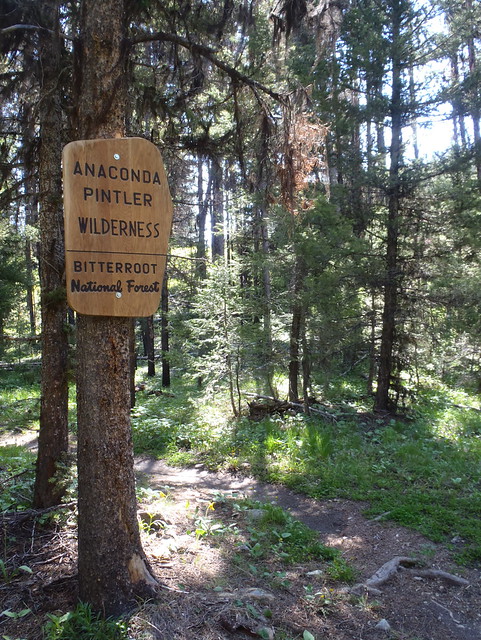 As much as I would like to write a lengthy and reflective trip report about this two-night trip into the Anaconda-Pintler Wilderness, I’m going to stick to a “just the facts” approach this time around. With another trip coming up this weekend (June 19-20), and likely another trip the following weekend, I risk falling behind on documenting my backpacking trips if I neglect putting fingers to keyboard. I suppose even the most cursory narrative is better than no narrative at all. And after the lengthy Big Creek Lakes Trail to Unnamed Lakes trip report it might be a nice change of pace to maintain a more focused approach to writing about backpacking rather than exploring mental side-trails every few sentences.

This was my first trip into the Anaconda-Pintler Wilderness area and I was joined by Chris, who I’ve done many dayhikes with this year and who ventured up Blodgett Canyon with me in April for an early season backpacking trip. We arrived at an empty trailhead around 10 a.m. on a beautiful Friday morning. A family out for a leisurely stroll pulled in after a few minutes; they would be the only other hikers we would see on our trip. We headed down the trail with photocopied maps and guidebook descriptions, as well as knowledge about the area gleaned from other hikers. Our first day was relatively mild, only about 4.5 miles in and only a few hundred feet of elevation gain. Our plan was to basecamp at Kurtz Flats, described in the guidebook as “a very attractive sloping meadow running right down to the edge of the river . . . also a popular camping spot” and recommended by other hikers. We would then explore the area from there with an ambitious 15-mile round trip hike to Hidden Lake.

The trail to Kurtz Flats was easy riverside hiking and passed through some areas that were burned more than a decade ago. Wildflowers, the East Fork of the Bitterroot River and forested mountains made up the bulk of the scenery. When we arrived at Kurtz Flats, we quickly recognized that it was not a place we wanted to camp for two nights. Fallen trees made it difficult to find a good campsite and the lack of shade on a warm weekend was also a discouraging characteristic. We continued up the trail for another half-mile or so, before arriving at a flat spot with several nice rock outcroppings that we both simultaneously and separately recognized as an appealing place to set down our packs and put up our tents. Once we’d established our campsite, we didn’t second-guess our decision to take a “pass” on Kurtz Flats. 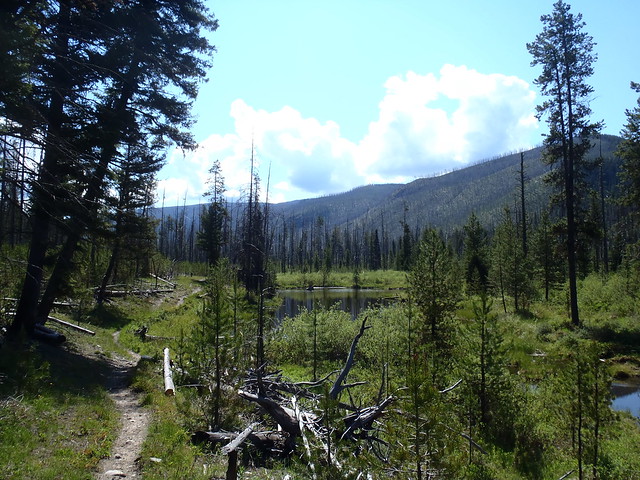 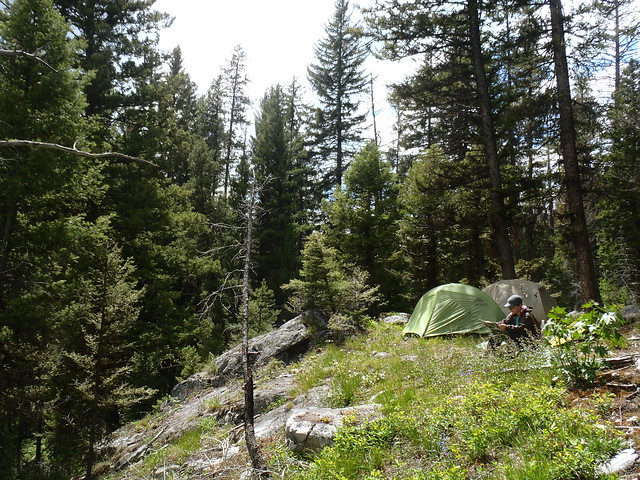 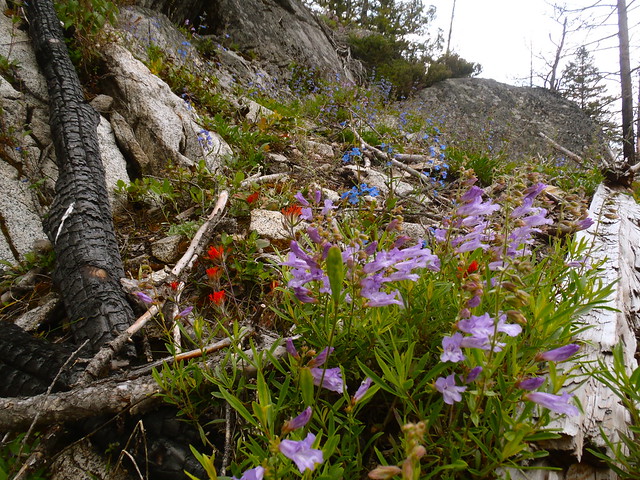 With camp set up by early afternoon, we spent most of the afternoon relaxing and admiring the wildflowers. A small stream nearby provided a convenient place to filter water and steady background noise. We strolled up the trail for a bit near twilight, and considered heading to Star Falls but turned back at a stream crossing. Despite the hike in being fairly easy we both found ourselves ready to call it a night fairly early in the evening, with the mosquitoes factoring into that decision a bit more than I’d like to admit.

We got an early start the next morning for the lengthy dayhike to Hidden Lake and were on the trail by about 8 a.m. Early in the hike we cut out some deadfall and limbs that were across the trail, but the upper reaches of the trail were in surprisingly good shape. Star Falls was better than either of us expected and I could’ve spent much more time there if not for the lure of Hidden Lake. Plus, we would see it on the way back so I didn’t experience my usual bout of waterfall-withdrawal. After the waterfall the trail maintains an uphill but reasonable, almost friendly, gradient that doesn’t give a fit hiker too much to complain about. Much of this trail was also burned in 2000 or 2001, which provided little shade and made us thankful we were hiking in early summer and not in the hottest days of August. Other than glimpses of the East Fork and views to adjacent mountainsides and ridgelines, this section of trail was pleasant but non-remarkable. 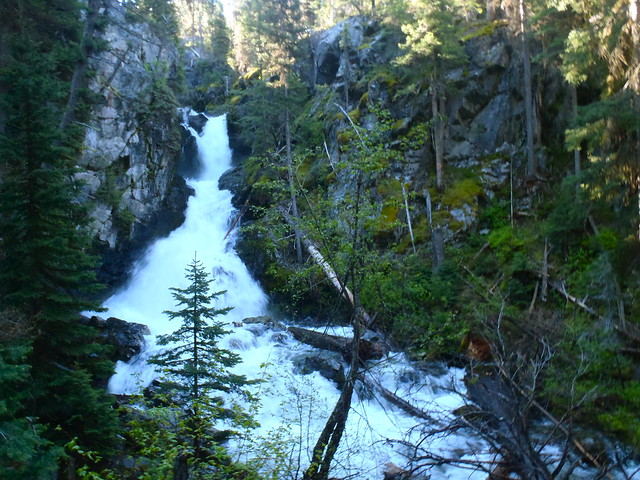 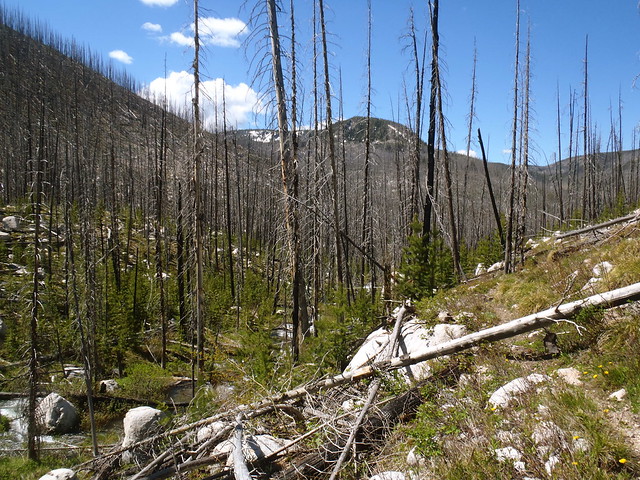 We reached the junction with the trail to Hidden Lake around 1 p.m. or so, after passing the unsigned junction to Kelly and Ripple Lakes. Just before the junction we hit the first patch of snow on the trail; there was plenty more on the way to Hidden Lake. The last quarter-mile was entirely on snow, but it was fortunately well-packed so no postholing occurred.

Arriving at the lake made all the effort worth it and distracted us from the effort we would need to put in on our return trip. Mountains loaded with snow towered above the frozen lake and the blue sky overhead was perfect. The crisp temperatures mixed with a warming sun and made it somewhat difficult to pick the right layers to wear while sitting by the lakeside, but this was a trivial inconvenience when compared to the reward of such beauty. We enjoyed tea by the lake and snacks, conversation, and quiet moments of just enjoying being in the presence of such an awe-inspiring landscape. Our time at the lake came to an end much too soon, and after doing a quick hike of a few hundred yards to a nearby unnamed lake, we headed back down the trail to our campsite. 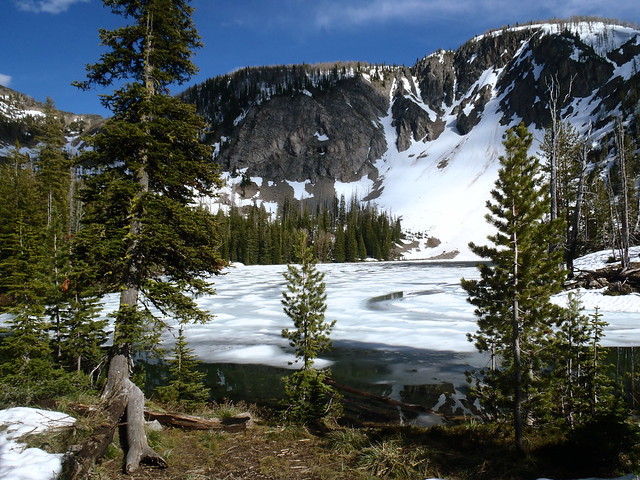 The hike back to camp went fairly quickly and we were both thankful for the gentle grade of the trail. The wildflowers appeared more vibrant in the evening light than they had on the way up. Reaching the trees and limbs we had cleared the trail was a two-fold pleasure — it was a sign that we were close to camp and it was nice to enjoy a favor that we had done for ourselves as well as other hikes. We reached camp shortly after 9 p.m. and ate dinner while the sun set and the stars came out. Chris went to bed early than I did; I stayed up looking at the stars and listening to music until I couldn’t keep my eyes open. 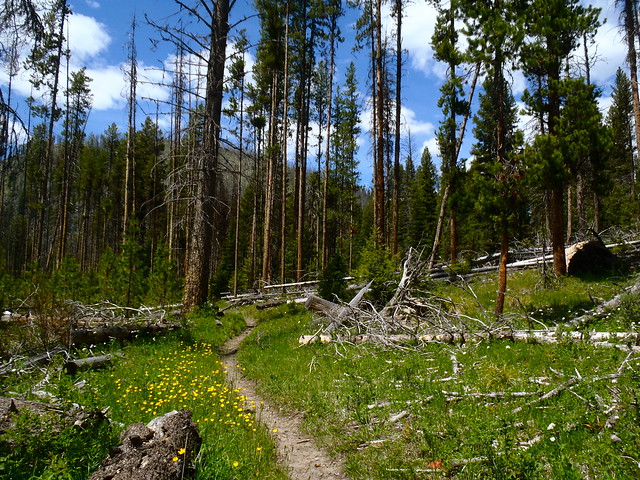 Tired from the previous day’s hike, we slept in longer than the previous morning but were packed up and ready to hit the trail by late morning. We threw Frisbee around the campsite for a bit to loosen up our muscles before heading toward the trailhead. It was a warm day with only a light breeze to stir the air around. We didn’t encounter any hikers or wildlife on the way out, just the pleasantry of a downhill hike paralleling the East Fork of the Bitterroot River. The wildflowers looked just as healthy on the way in as on the way out. We made it back to the trailhead by mid-afternoon, with plenty of water breaks along the way, and stretched for a long time before hopping in the car and reluctantly motoring away from the wilderness.