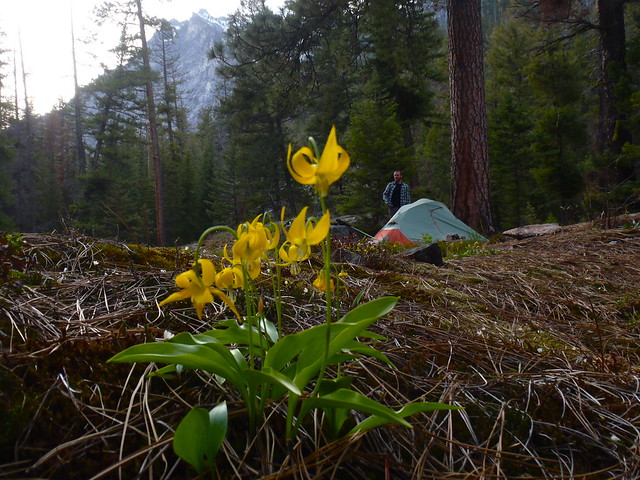 A mere two weeks after my previous backpacking trip in Blodgett Canyon, I found myself returning for an overnight trip with my good friend John. Time constraints prevented us from venturing past the five-mile mark up the canyon, but an excellent campsite prevented us from feeling anything remotely close to disappointment. Situated out of sight of the trail, we pitched our tents in a grove of pine trees amidst scattered beds of glacier lilies. Not only was nature’s thermometer set to “Paradise” for our trip, but the wildflowers were near peak, a nearby waterfall rushed with snowmelt, and we caught glimpses of a moose on the trail and elk on the edge of our camp. Not a bad introduction to Montana backpacking for John, especially considering that step-for-step the first five miles of the Blodgett Canyon Trail are some of the most stunning and charming of any path that I’ve had the pleasure of treading.

John was in town only briefly; he was passing through on his way to Alaska for a seasonal job with the Forest Service. But where there’s a will there’s a way and we made it a priority to get a backpacking trip in during his weeklong layover in Montana. We met five years ago when we were both working for the Forest Service in Kentucky’s Red River Gorge and it didn’t take long for us to become friends. In the subsequent years, we backpacked together in five states (Kentucky, Arizona, Tennessee, North Carolina and Georgia) before adding Montana to the list on this trip. It’s always a pleasure to catch up with a close friend on a backpacking trip. Twilight reminiscences with a kindred spirit about past trips and the accompanying reflections upon the journey of life are good medicine even when nothing seems to ail you. 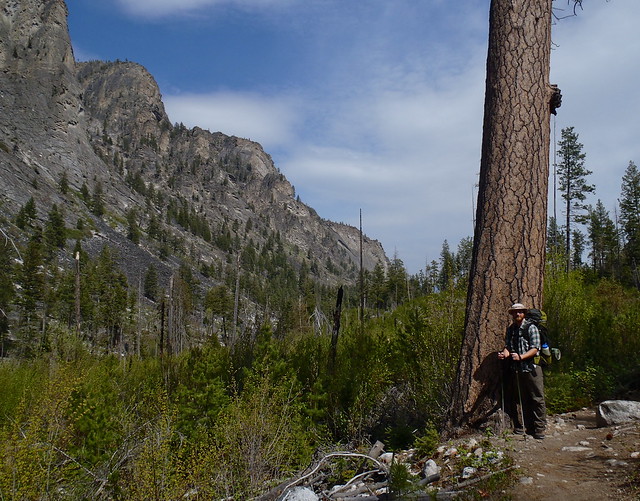 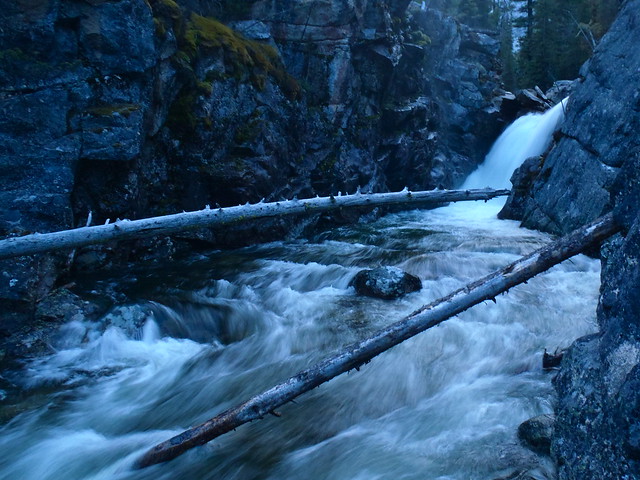 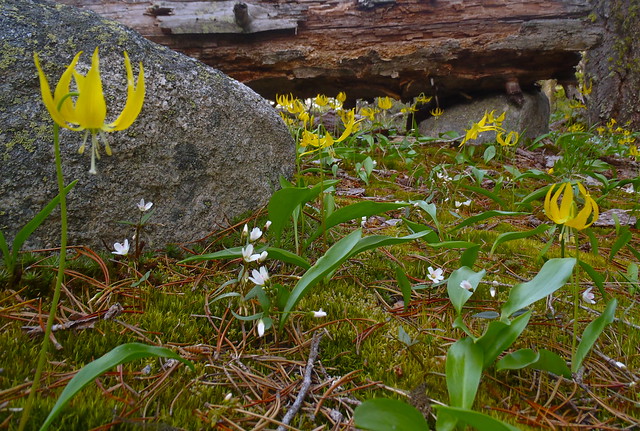 Our excited and steady pace put us at the campsite in mid-afternoon, which left us plenty of time to explore the waterfalls, throw some Frisbee, and admire the scenery before dinner. We chose to dine towards the top of a sizable rock outcropping that rose up from the forest floor and provided incredible views down the canyon, up the canyon, and across the canyon to the mountains rising up on the opposite side of Blodgett Creek. On a whim, we decided to take an inventory of the beauty and majesty that surrounded our chosen dining spot. Clockwise, it was composed of the following elements:

1 o’clock (foreground): Sound of the waterfall, course of the creek, rocks, trees, wildflowers

3 o’clock: Setting sun dropping into the deeply notched head of the canyon

3 o’clock to 9 o’clock: View down the canyon to the valley, faded blue-jean blue of twilight 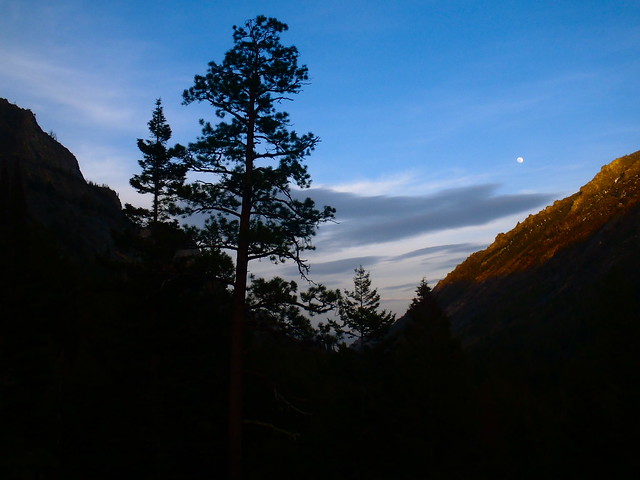 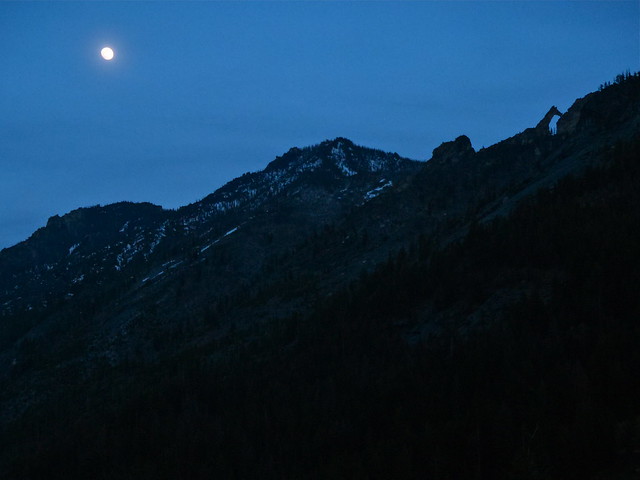 With the clanging of aluminum and titanium, the assembling and lighting of stoves, and the rustling of plastic bags, we added our own sounds to the landscape. They seemed rather industrial when compared to birdsong and rushing water. As we prepared our dinners we laughed about various episodes of buffoonery that had occurred on past trips. We empathized with each other over long-ago and similar but separate gut-wrenching and nose-burning experiences with Backpacker’s Pantry “Wild West Chili”. That story of shared misery was one of our early bonding moments as fellow backpackers and we still get a hearty laugh out of it. To that story we’ve added creekwalking in search of waterfalls, bushwhacking through rhododendron to natural arches in Tennessee and Kentucky, a brutally cold and damp night in Great Smoky Mountains National Park, and a sunrise over the Atlantic Ocean on Cumberland Island National Seashore.

With the moon nearly full, there was no need for the bright beams of our headlamps. Other than using the red light setting of our headlamps for detailed tasks, such as cleaning out pots, we were able to view the moonlit forest with our unaided eyes until headed to bed a bit before 11 p.m. The snowcapped mountains and glacier lilies illuminated by the monochromatic glow of the moon made it seem as if I was in a dream before I had even gotten in my sleeping bag.

John awoke well before I did and ventured up the trail to another waterfall after eating breakfast. While waiting for him to return, I drank coffee, ate oatmeal, and enjoyed a cup of tea and read some poetry while perched atop the rock outcropping and soaking up the morning sun. After packing up, we crossed the creek on a downed tree and experienced a different perspective of its downward course through the rocks. Once pictures were taken and we’d sufficiently basked in the power and beauty we crossed back to our packs, picked them up, and headed down the trail. 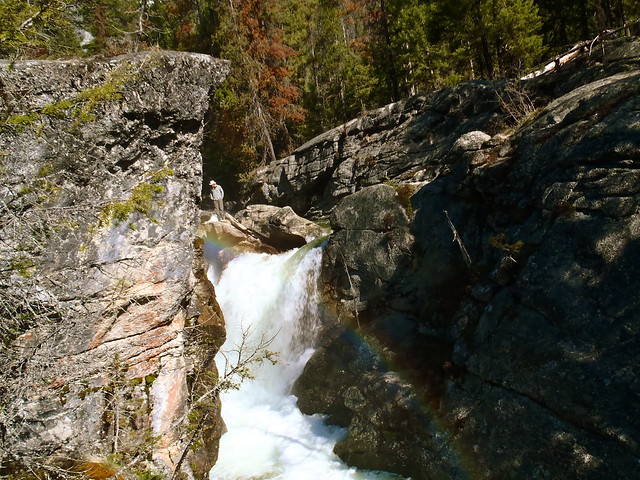 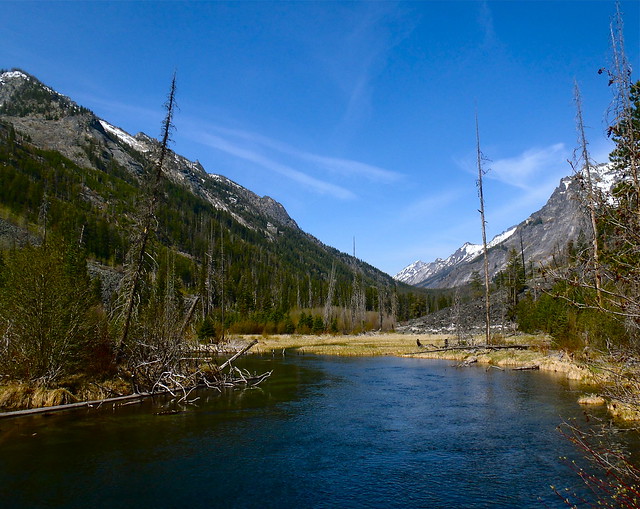 While we’d had the campsite to ourselves, we encountered over a dozen people on our way out. A few other backpackers, some dayhikers, fisherman, and a couple of rock climbers. Other than exchanging simple greetings and yielding right-of-way on the narrower sections of trail, our hike out was nothing more than non-strenuous exercise and a chance to appreciate the towering cliffs and cascading stream from a different vantage point.

We made it back to the trailhead by mid-afternoon, which gave John plenty of time to pack. He caught a flight to Juneau the next morning. Upon his return in October, we can hopefully add Idaho and Wyoming to the list of states we’ve backpacked in before he heads back to Florida. In the meantime, I’ll be trying to maintain my pace of backpacking a weekend or two per month, with my only “goal” being to add another wilderness area or two to the list of places I’ve backpacked. The Anaconda-Pintler Wilderness, Rattlesnake Wilderness, and Frank Church-River of No Return Wilderness are all near enough for weekend trips, if I can bring myself to drive past the Selway-Bitterroot Wilderness on the way.